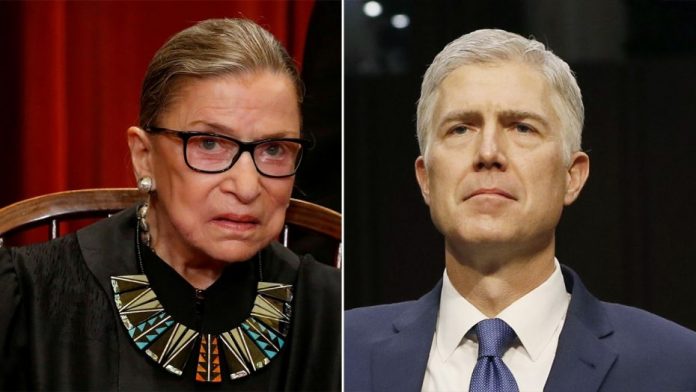 The mainstream media is all worked up over the fact Supreme Court Justice Neil Gorsuch delivered a speech this week at a hotel owned by President Trump, but fellow Justice Ruth Bader Ginsburg has been given a pass for essentially blaming sexism for Trump’s victory. The reactions to the separate events are another example of the double standard prominent throughout America.

Gorsuch’s Thursday speech at the Trump International Hotel in Washington, on behalf of The Fund for American Studies, upset the liberal media and Democratic lawmakers. Bloomberg referred to the hotel as a “controversial venue,” USA Today published an opinion piece that claimed Gorsuch “wasted” a chance to show leadership and Politico covered protestors holding signs such as “Gor$uch for sale.”

“Justice Gorsuch speaking to a conservative group in the Trump Hotel, where the president continues to hold a financial stake, is everything that was wrong with his nomination,” Senate Democratic leader Chuck Schumer of New York said in a statement.

Organizers of the event have said the hotel was not selected for political reasons and it was simply an appropriate venue. But the liberal media apparently is concerned that Gorsuch won’t be fair if lawsuits against Trump’s businesses ever reach the Supreme Court.

Business Insider published a story headlined, “Neil Gorsuch gave a speech at the Trump International Hotel — and it sparked an uproar,” that goes on to note that ethics watchdogs “cried foul over the speech and questioned whether Gorsuch’s appearance compromised his impartiality.”

“It was Trump who appointed Gorsuch… now one of his first speeches is at the president’s hotel. And there’s a real concern that this could undermine the public’s confidence in Gorsuch’s judicial independence,” Jackie Northam, NPR’s foreign affairs reporter, said on Alabama Public Radio.

Constitutional Accountability Center president Elizabeth Wydra told NPR, “He’s helping a conservative organization put money into the pockets of the president who put him on the bench… It’s certainly not a good look.”

Liberal organizations including People for the American Way, Naral, and Planned Parenthood have even reached out to Chief Justice John Roberts about Gorsuch’s speech, according to Business Insider.

Meanwhile, Gorsuch’s judicial colleague, Ginsburg, apparently can do no wrong in the eyes of the mainstream media. Ginsburg recently said she has “no doubt” that sexism played a role in Hillary Clinton’s Election Day loss to Trump.

“I have no doubt that it did,” Ginsburg told CBS’ Charlie Rose at an event on Tuesday when he asked if sexism played a “major” role in the presidential election.

Despite the bias in Ginsburg’s remark, the Washington Post made no mention of a potential conflict of interest when covering the comment. Time, HuffPost, Politico, and a variety of other publications also covered Ginsburg’s comments without mentioning any outrage or wrongdoing.

In fact, while liberal outlets such as CNN dusted off legal ethics experts to slam Gorsuch, not a single negative story about Ginsburg blaming Clinton’s loss on sexism could be located at the time this story was published.