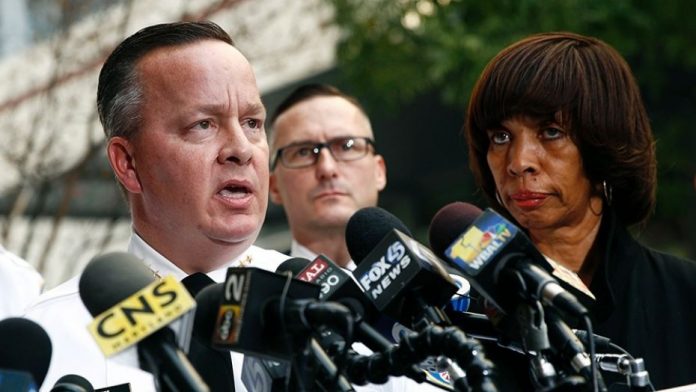 High-crime Baltimore’s top cop was fired Friday after failing to halt the surge in killings that have turned Maryland’s largest city into one of the deadliest in the country.

Police Commissioner Kevin Davis was relieved of his command by Mayor Catherine Pugh, who said it was time for new leadership to deal with the murders.

“As I have made clear, reducing violence and restoring the confidence of our citizens in their police officers is my highest priority,” said Pugh. “The fact is, we are not achieving the pace of progress that our residents have every right to expect in the weeks since we ended what was nearly a record year for homicides in the City of Baltimore.”

Davis had a contract that ran until 2020.

Deputy Commissioner Darryl DeSousa, a 30-year veteran of the force, will be made permanent following “appropriate approvals,” Pugh said.

DeSousa, 53, said he was honored by the mayor’s confidence in him at “this critical time” for the city.

“Baltimore has long been my home and I’ve spent my career on its streets and in its neighborhoods to address problems and bring about solutions that are meaningful for the people we serve,” he said.

Violent crime rates in Baltimore have been notoriously high for decades and the city has recently been dealing with increasing homicides fueled by drugs and other problems, the Associated Press reported.

Baltimore ended 2017 with 343 killings, bringing the annual homicide rate to its highest ever – roughly 56 killings per 100,000 people. Baltimore, which has shrunk over decades, currently has about 615,000 inhabitants.

Maryland enacted one of the nation’s toughest gun laws in 2013 but that hasn’t stopped Baltimore’s criminals from obtaining and using guns, especially lethal weapons with high-capacity magazines.

The murder rate has soared as some critics have accused Baltimore cops of taking a hands-off approach to fighting crime since six officers were charged in connection with the 2015 death of Freddie Gray, a black man whose fatal spinal cord injury in police custody triggered massive protests that year and the city’s worst riots in decades.

“The conventional wisdom, or widely agreed upon speculation, suggests that the great increase in murders is happening partly because the police have withdrawn from aggressively addressing crime in the city’s many poor, crime-ridden neighborhoods,” said Donald Norris, professor emeritus of public policy at the University of Maryland Baltimore County.