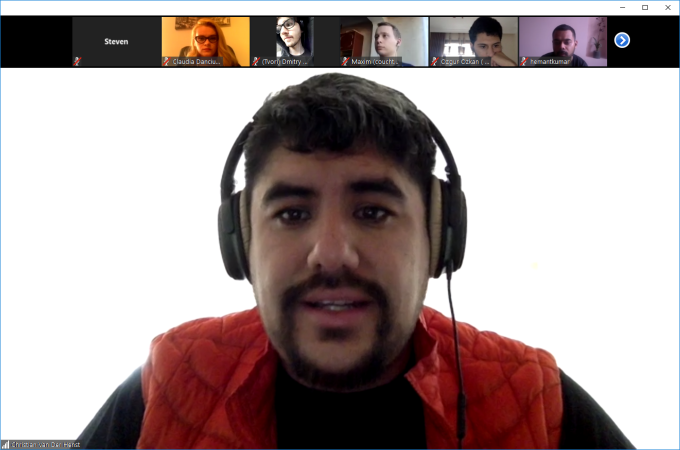 Today is the world’s biggest startup demo day ever, but it’s not happening in Silicon Valley. It’s happening all over the world as 1,584 companies complete Y Combinator’s online Startup School Founders Track program and 797 present their demo videos.

That’s out of 2,820 startups accepted from the 13,321 companies that applied to Y Combinator’s 10-week program of one-on-one mentorship from past YC startup founders, virtual office hours with a group of fellow students, and an online lecture series.

The leading accelerator typically teaches two batches of about 100 startups per year through an in-person program where YC partners and guest speakers teach them how to grow faster. The startups get $120,000 in funding, education, and connections in exchange for 7% of their equity.

But Altman says YC was looking for a way “to advise not just a few hundreds companies a year but a few thousand.” Its first attempt at scaling was the YC Fellowship, where a few dozen startups even more nascent than its typical admits were given remote guidance for a 1.5% equity stake. Here are our picks of the top companies from last year’s YC Fellowship.

Yet YC decided to shut down the Fellowship, because Altman says it “was not going to be the thing that added another zero to what we were doing.” So after the success of Altman’s Stanford online class, YC took its teachings and molded them into a massive open online course (MOOC) called Startup School. It features founders like Facebook’s Dustin Moskovitz and Slack’s Stewart Butterfield on how to build a startup, and Sequoia and Khosla VCs on how to raise money, plus sessions on recruiting, diversity, and PR.

By democratizing startup knowledge, YC hoped to spur economic activity around the globe while promoting and preparing companies for its more formalized accelerator program. The problem with MOOCs is that there’s often no accountability or support network to keep students engaged.

The solution was the Startup School Founders Track. Founders would apply, and if admitted, be assigned a YC alumni as their mentor and a set of 20 other startups as their peer group. YC invests no cash and takes no equity in the companies, which don’t have to pay anything to participate.

The 10-week program required them to watch the lectures, attend 9 of 10 online group office hours with their peers, and submit updates on their growth and metrics at least 9 of the 10 weeks. There were also individual mentor-on-startup feedback sessions and support via email available.

“The amazing thing is that it worked at all” Altman tells me of the 7,746 founders who went through the program . In-person dinners were replaced by rapid-fire Slack rooms where the peer groups stepped up to help each other out. And while it didn’t invest in the startups, Altman says YC helped some arrange deals for free hosting credits and other resources.

In the end, 1,584 startups passed the course. They encompass every vertical you can imagine, from drones and alternative energy to augmented reality and biotech. You can watch their demo video presentations here. Though not as polished as the slide decks you at the main YC Demo Day at Mountain View’s Computer History Museum, the videos still feature plenty of pithy jokes and up-and-to-the-right growth charts.

“One big and obvious but important difference is how much more internationally focused this is” Altman said. Expanding beyond the U.S. has been top-of-mind for Y Combinator lately. It did Startup School events around the world last year, which translated into YC’s winter 2017 batch being its most geographically diverse set of companies yet, hailing from 22 countries.

The 1500+ Founders Track graduate companies won’t get full access to YC’s alumni network and software like those in the main accelerator do. Altman says “We didn’t call it ‘YC Startup School’ intentionally. That’s in part because calling it the ‘YC Fellowship’ led to some confusion, and the accelerator doesn’t want to dilute its elite alumni graph with startups who weren’t screened as vigorously.

Still, turning Startup School into a full-fledged online accelerator massively expands YC’s footprint, creating a funnel for its core program while freely dispensing powerful entrepreneurship knowledge. “If this keeps working I think we can have a significant impact on the financial outcomes of the world” Altman concludes. “Next time we could do 10,000.”