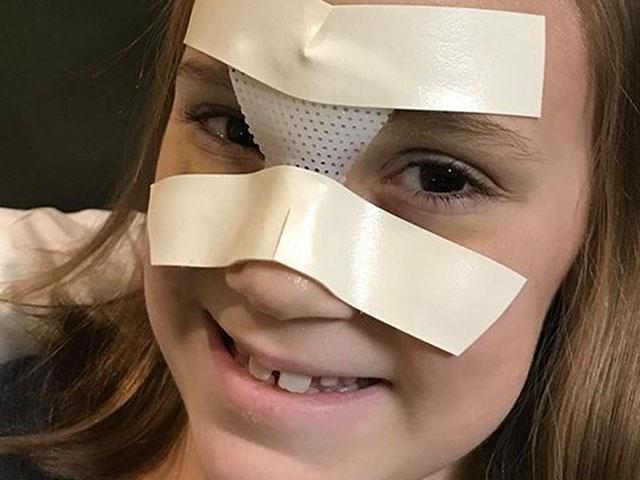 “We’re just estatic, it seems that every day is getting better and better,” Chloe’s father, Jared, told CBN News in a phone interview.

Chloe suffered a severe concussion when she was struck by a wooden beam at the construction site of a house her father was building. She later slipped into a coma and ended up on life support.

Her parents’ desperate prayers were heard all over the world after a video her parents posted on Facebook about her condition went viral. Hundreds of thousands of people followed her story and flooded the family with encouraging words.

On January 18th, just 10 days after her accident, Chloe woke from her coma, a phenomena her parents credit soley to the power of prayer.

Jared previously told CBN News, “It is all the hundreds of thousands of people that have been praying and asking God to bring Chloe out of this. We know it’s because of him and his power and we’re giving him all the glory and honor and we want to tell everybody ‘thank you’ for all that.”

Now, after nearly a month in the Nashville hospital, Chloe and her father are anxiously awaiting for the magic words: “time to go home.”

“It could be any minute now,” Jared told CBN News on Tuesday. “She just has to get stitches removed and the splint off her face and then we should be good to go.”

He continued, “We’re so happy to be leaving, we’re afraid to leave the room and walk around because we’re worried we’ll miss them coming by to discharge us.”

Jared says doctors are giving Chloe a full recovery time of three months. She will have weekly and bi-weekly check ups, but almost all of her time alloted for physical therapy has been removed due to her remarkable progress.

And for Chloe, Jared told us she’s most excited to see her siblings, one of whom she hasn’t seen at all since her accident.

“She keeps talking about how she can’t wait to see her siblings. Her exact words were, ‘First thing I’m going to do when I get home is cry, see my siblings, and take a shower,’ ” Jared said.

The Clarks moved from their homestate of Alabama to Springhill, Tennessee in order to stay with the team of doctors who have been a part of Chloe’s recovery, and hope to receive some additional financial assistance for the medical bills.

“We have a huge financial burden ahead of us,” Jared said. “But I’m not worried about that. I have my daughter and that’s all that matters.”

Jared also says he’s thankful to everyone who has donated in an effort to help ease some of the expense. He said the money will be a big help as they start to bounce back, but says what he wants others to take away from their situation is the prayer.

“We want to focus on the prayers. No amount of money in the world could’ve saved her. It was the prayers. I don’t know how to tell everyone ‘thank you’ enough,” he said.

Jared added, “My wife and I keep saying this whole thing has restored our faith in humanity. You see all the bad things happening on the news, but Chloe’s story just proves that God’s family is still great and big and powerful and there are still people out there doing good things.”

During her recovery, the “Pray for Chloe” Facebook page, which now has thousands of likes, will remain standing while Jared hopes to use it as a “prayer warrior group” for other families going through medical emergencies and crises.

“I would love for it to turn into a ministry under Chloe’s name,” he said. “To be able to get thousands praying instantly like that is huge, and we just want to spread the blessing and give back because it was such a blessing for us.”

The Clarks say the number of people that have been reached is “awe-inspiring” and they know this was always God’s plan for Chloe.