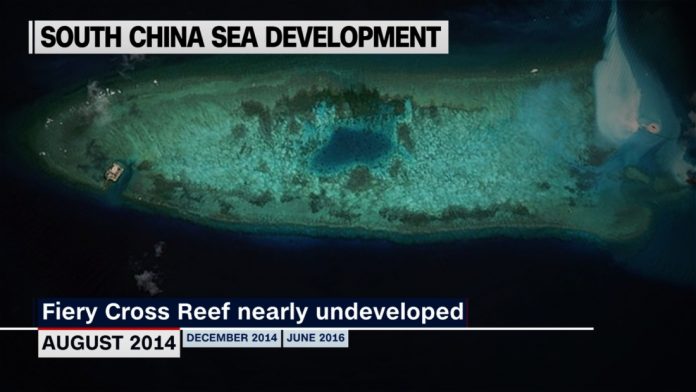 Share on Facebook
Tweet on Twitter
But they are also located in one of the most contested stretches of water in the world — the South China Sea — and the island chain is now is home to some 15 military bases.
Since the beginning of 2014, China reclaimed more than 3,000 acres of land centering on seven reefs, according to the US. By contrast, the other claimants have reclaimed just 100 acres over 45 years.

In 2016, I ventured into the Spratlys to better understand the ecological cost of this conversion process and found a devastating impact on coral reefs.

When an atoll is converted to a military base, it is dredged and the corals are used as a foundation for runways, buildings, armaments, and other installations.

Another Carnegie scientist and I visited one of the atolls controlled by Malaysia in the southeast corner of the archipelago.

After the Swallow Reef study, we extended our reach to all of the atolls currently occupied by China, Malaysia, Philippines, and Vietnam.

We compared the proportion of coral reef on occupied atolls to unoccupied ones, and our research, published this month, found up to a 70% reduction in reef cover on those harboring military bases.

In other words, military base and outpost building has destroyed huge expanses of coral reef, which means that millions of its colorful lifeforms have been wiped off the planet.

Face to face with a submarine

On our dives last July in the Spratlys, the low-frequency, hammering tone of deep ocean pile-driving — the practice of pounding long, hollow steel pipes into the seabed — constantly interrupted our efforts to photograph the riot of species comprising each reefscape.

During our night dives the pounding seem to intensify. As we scanned for nocturnal sea life with our lights, we could hear the maddening bong of distant driving every five seconds.

During the day, numerous military ships passed by. Once we surfaced to encounter a hulking submarine not more than a few hundred meters from our location.

Zoomed out in Google Earth, the Spratlys are virtually invisible, a dim constellation of dots afloat in a vast deep blue basin.

Zooming in, one easily gets lost island-hopping among more than a hundred reefs that shimmer in pale blue colors against the deep blue unknown.

The deep blue expanse engulfing each atoll is underlain by a seabed peppered with oil and gas deposits, which further fuels the controversy on who controls the South China Sea.

Shockingly, the vast majority of the loss in reef cover has taken place in just the past three years.

Yet it’s promising that there are still a hundred or so reefs with relatively little human impact, so conservation and management ought to have a chance to make a difference before it is too late.

Also promising is the fact that recent coral bleaching events, as a result of rising sea temperatures, do not seem to have had as large an impact in the South China Sea as we have seen on the Great Barrier Reef. I saw very little bleaching during our survey dives at Swallow Reef.

Conservationists have long argued that saving coral reefs in the South China Sea can be achieved by way of an international park agreement between nations.

Based on our work with Planet’s dove satellites and our underwater surveys, there is indeed a pressing need to get an accord accomplished to protect this precious biodiversity hotspot.