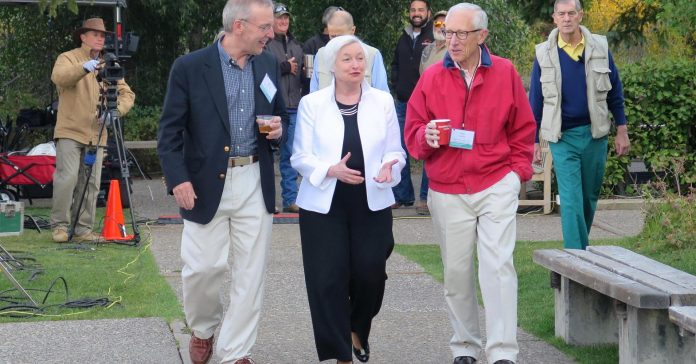 The Fed has raised interest rates three times in the past 10 years, reversing its zero rate policy after seven years in 2015. In the years since the financial crisis, the Fed has targeted an inflation rate of 2 percent.

“It went from being implicit to explicit,” said Swonk. “They wanted to show the Fed could reflate the economy.”

Inflation is one of the Fed’s two mandates, as it is tasked with maintaining price stability. The other mandate is full employment, and with unemployment at 4.7 percent, some economists believe the job market is nearly as good as it will get.

Signs of inflation have been showing up in other metrics and in wages, so some market pros are critical of the Fed’s pace of interest rate hikes.

“It’s surely a game of semantics,” said Peter Boockvar, chief market analyst at Lindsey Group. “Core CPI has been above 2 percent for 15 straight months, and you’ll have people like [Chicago Fed President Charles] Evans saying they’re not at their target.” Evans is viewed as a dovish member of the Fed.

“Even at 1.7 percent (core), they can check off some of that [inflation] box. They’re pretty much there when you reach your mandate of 2 percent inflation, which is a made up number,” he said. “The Fed is essentially meeting their internal mandate. They should be at a 3 percent [fed funds rate] today. It just tells you they dragged their feet … They find themselves way behind where they should be.”

The target range for the fed funds rate is 0.75 to 1 percent.

“You’re going to get a hot inflation number and weak consumption number. When it’s 70 degrees in Chicago in February, we don’t consume any heat,” Swonk said.

The PCE data is released at 8:30 a.m. There is Chicago PMI data at 9:45 a.m. Friday and consumer sentiment at 10 a.m. Boockvar said sentiment could be important since this week’s strong consumer confidence was measureprior to the failure of Congress to vote on health care last week.