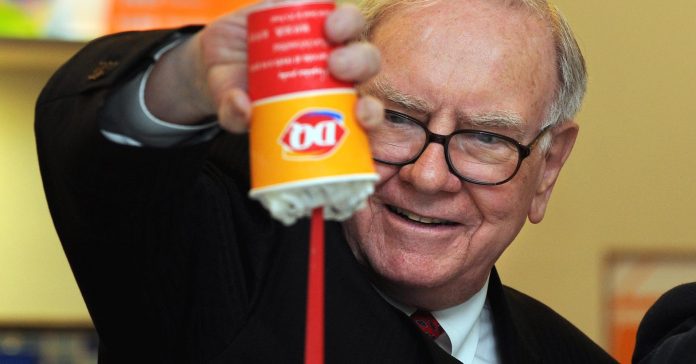 Warren Buffett wants to lower health-care costs, but his fast-food-fueled diet and his food and beverage investments have historically been linked to costlier care.

The Berkshire Hathaway CEO, Amazon’s Jeff Bezos and J.P. Morgan Chase’s Jamie Dimon announced in January they would partner to cut health-care costs and improve services for their U.S. employees. On Monday, Buffett repeated his now-famous line that health-care spending is a “tapeworm on the economic system” in an interview with CNBC’s “Squawk Box.”

In a conversation earlier in the morning, the investing legend said he frequents McDonald’s, Burger King and occasionally Wendy’s. Buffett’s Berkshire owns International Dairy Queen and holds stakes in Restaurant Brands International, the parent company of Burger King, as well as Kraft-Heinz and Coca-Cola.

“I think it’s a little irrational wanting to improve health care and investing in companies that also produce highly processed, minimally nutritious products that are contributing to, are not the only cause of, but are contributing to a public health epidemic,” said Las Vegas-based nutritionist Andy Bellatti.

More than one-third of American adults are obese, according to the Centers for Disease Control and Prevention. Obesity costs the U.S. an estimated $147 billion in medical expenses, according to a study published in Health Affairs in 2009.

Being overweight or obese can contribute to chronic, and costly, conditions such as diabetes and heart disease.

Type 2 diabetes was estimated to cost $245 billion in the U.S. in 2012, including $176 billion for direct medical costs and another $69 billion in indirect costs, according to the American Diabetes Association.

Heart disease costs the U.S. $200 billion every year in health-care services, medications and lost productivity, according to the CDC’s National Center for Health Statistics.

Of course, not everyone who drinks a can of Coke or eats a cheeseburger is overweight or obese. But public health advocates have urged people to eat fewer processed foods and drink fewer sugary drinks while boosting consumption of whole foods such as fruits and vegetables.

As for Buffett, he has spoken very publicly about his love for breakfast at McDonald’s and his penchant for Cherry Coke.