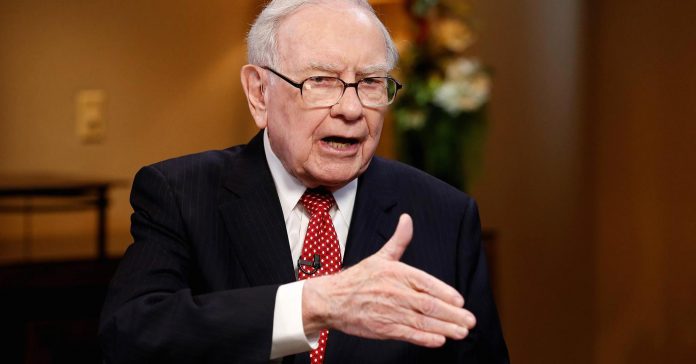 Billionaire investor Warren Buffett, who did not support the Republican plans to cut taxes, told CNBC on Monday his Berkshire Hathaway stands to benefit from the new corporate rate.

Corporate tax reform is a “huge tailwind” for American businesses, he said, referring to the new GOP tax law that lowers the federal corporate rate from 35 percent to 21 percent.

The 87-year-old Berkshire chairman and CEO released his annual to shareholders on Saturday, and revealed that the company’s net-worth increased last year to $65.3 billion, with $29 billion of that coming from the change in tax law.

Buffett explained the reason, in part, for the gain.

“We had about $100 billion of unrealized gain in equities. When they’re sold you pay tax on that. And previously when the tax was 35 percent we would have had a $35 billion reserve for taxes against that as a liability. That would drop to about 21 billion,” he said. “So $14 billion, roughly, was a reduction in the amount of tax that when we sell those securities we will pay. It wasn’t cash now. But it reduced a liability. When you reduce a liability net worth goes up.”

In his letter, Buffett also said the Omaha-based conglomerate has amassed a $116 billion war chest to spend on a deal but feels prices were too high to act in a big way last year.

Buffett, also nicknamed the “Oracle of Omaha” for his successful track record of stocks picks and his market commentary that’s widely-followed by the investment community, joined CNBC from Omaha, Nebraska. He became the controlling shareholder of Berkshire in the 1960s.