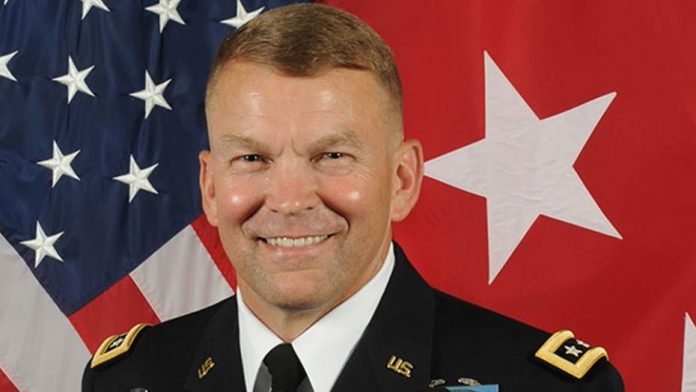 Lt. General Jeffrey Buchanon, from US Army North, has been tasked by the Pentagon to oversee the federal recovery efforts in the Caribbean-based commonwealth and is expected to take over the island’s command center that has been set up at the Puerto Rico Convention Center in San Juan.

A three-star general with a solid record of leadership in the war zone was named on Thursday to spearhead the U.S. military’s relief efforts in storm-scarred Puerto Rico.

Lt. General Jeffrey Buchanon, from U.S. Army North, has been tasked by the Pentagon to oversee the federal recovery efforts in the Caribbean-based commonwealth and is expected to take over the island’s command center that has been set up at the Puerto Rico Convention Center in San Juan. The post comes as the Trump administration fights back against claims it’s responded too slowly to the devastation triggered by Hurricane Maria just over a week ago.

The appointment of Buchanon is intended to help speed that process along. The military effort on the island is expected to grow in the next few days.

Craig Fugate, head of the Federal Emergency Management Agency during the previous administration, told the Los Angeles Times that having a commander who reports to both the governor and the military chain of command will create a “unified team” of military and civilian disaster response units, adding that the relief effort in Puerto Rico has been hampered by a bottleneck of supplies at the Port of San Juan and downed roads. A dual-status commander can help clear up fallen infrastructure more quickly.

Buchanon boasts an impressive military career with experience that could prove beneficial to expediting relief efforts.

He has served four tours in Iraq and one in Afghanistan. In 2003-2004 he was the director of operations for the Coalition Military Assistance Training Team. He then went on to command the 2nd Brigade, 75th Division (TSB) and deployed to Iraq to serve as an advisor to the Iraqi Special Police Commando Division. Upon his return stateside, he served as the director of operations for U.S. Army North.

Puerto Rico is in the throes of a full-blown “humanitarian crisis,” with washed-out roads, downed power lines and damaged infrastructure — a scene President Trump intends to view first-hand next week.

Trump said Tuesday the federal government has been working hard to get food and water to the U.S. territory, saying the island was “hit as hard as you can hit.”

Last week Puerto Ricans hunkered down as Hurricane Maria raked the length of the island, killing at least 16 people, wrecking the electricity grid and grinding up homes, businesses, roads, and farms.

After the storm passed, islanders set about digging out from the mud and debris slung by worst storm to hit the island in nearly a decade. They went in search of basic necessities: water, food, gas for a generator, a cell phone signal or a Wi-Fi hotspot to connect with relatives.

All of that remains in very short supply a week later, and now many people on the island and around the world are wondering how long it will take for life to return to normal in the U.S. territory of 3.4 million.

Fox News’ Jennifer Griffin, Lucia I. Suarez Sang and The Associated Press contributed to this report.