While the Russia’s election meddling continues to be a contentious political issue on the ground, the American and Russian space agencies have signed an agreement to co-operate on a new venture to extend human space exploration to orbit the moon and eventually beyond it.

It proves once again that space is a truly international regime, where borders do not exist.

This agreement comes just a week before the 60th anniversary of Sputnik, the world’s first satellite.

Back in 1957, the US and Russia were rivals in space, trying to out do each other with bigger rockets (which was really to demonstrate the ability to drop nuclear weapons anywhere on the planet), and a race to the moon that culminated in Neil Armstrong’s famous small step. The space race was, in reality, a very expensive show of technological superiority.

Following that intense period of competition, the two agencies did a single co-operative mission, the Apollo Soyuz project, which linked an American and Russian capsule together to show how they could work together in space.

But then the two countries went their separate ways. The Russians built a series of orbiting space stations, culminating in their largest, Mir. 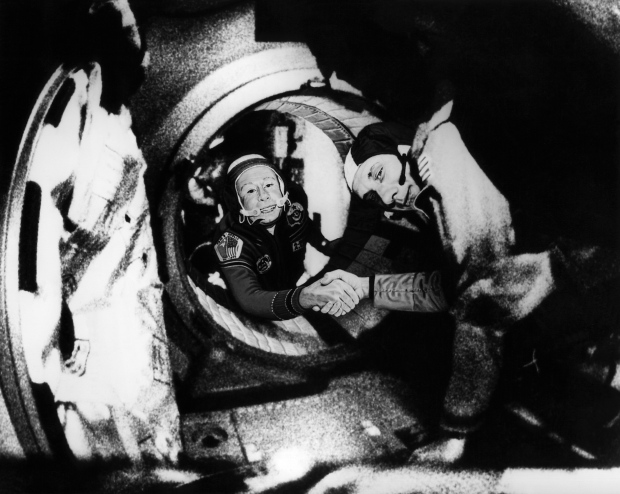 Commander of the Soviet crew of Soyuz, Alexei Leonov (L) and commander of the American crew of Apollo, Thomas Stafford (R), shake hands 17 July 1975 in the space, somewhere over Western Germany, after the Apollo-Soyuz docking manoeuvres. (AFP/Getty)

In the 1980’s, then president Ronald Reagan proposed building a giant space station called Freedom that would involve the participation of Canada, Europe and Japan. But the U.S. Congress was no longer interested in funding space mega-projects, so the space station was scaled back again and again, to the point where it became obvious that the only way to succeed was to get help from the outside.

And who better to ask than the only other space faring nation?

That was when true cooperation between the U.S. and Russia really began.

An agreement was signed, the project was re-named the International Space Station, and since then the two former rivals have worked closely together to build and operate the $149 billion project, along with other international partners, including Canada. Canadian astronaut Chris Hadfield, was the commander of the station for a time.

U.S. and Russian cooperation in space really began with the International Space Station. The two former rivals have worked closely together to build and operate the $149 billion project, (NASA)

More recently, since the retirement of the American space shuttle program, the Russians have been providing the only rides up to the station for American astronauts in the Soyuz spacecraft.

Now they’re headed back to the moon with an orbiting laboratory that will act as a remote outpost, a staging platform for future moon landings, and possibly, a stepping stone to Mars. This project will likely involve more partners, including China, as well as contributions from the private sector.

It is appropriate that space be a place without borders. Looking down from the high perspective of orbit, or from the surface of the moon, Earth is a single blue marble with no borders visible. Space is also a harsh environment, where everyone depends on everyone else for survival. There is no room for arguments or political rivalries.  It is the only way we will be able to afford the cost of deep space exploration.

Too bad that spirit of cooperation can’t be brought to the ground.

Looking down from the high perspective of orbit, or from the surface of the moon, Earth is a single blue marble with no borders visible. (NASA)