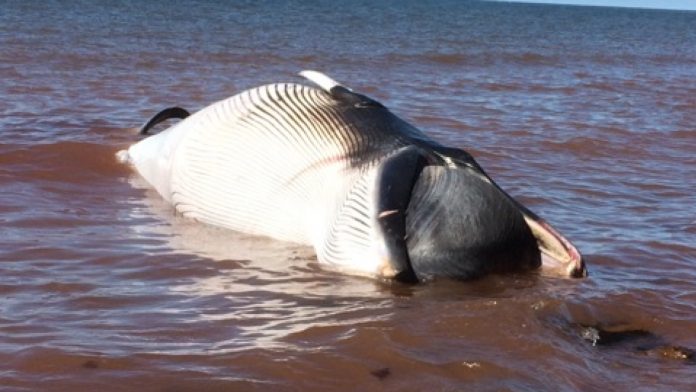 U.S. fisheries officials are raising the alarm about another whale species — minke whales.

The National Oceanic and Atmospheric Administration has launched an investigation into the spate of deaths of minkes along the east coast of the United States last year.

The U.S. agency, also known as NOAA, deemed the deaths “an unusual mortality event” and plans to hold a teleconference on Wednesday afternoon to discuss “next steps.”

The probe comes as whale experts in both Canada and the U.S. struggle to find ways to prevent the alarming number of deaths of North Atlantic right whales.

At least 17 of the endangered whales were found dead last year — 12 in Canadian waters and five in U.S. waters. Scientists believe human activity, including shipping and fishing, was the primary cause.

The latest carcass, found entangled last week off the coast of Virginia, has been identified as No. 3893, a 10-year-old female last seen in the Gulf of St. Lawrence on July 29, 2017, said NOAA.

Minke whales are “the most abundant” of the great whales and are found throughout the world in polar, temperate, and tropical waters, including the North Atlantic, according to NOAA officials.

The minke population is considered “stable throughout almost all of its range,” according to the agency website.

Minkes’ normal lifespan is up to 50 years.

The mammal’s size, coloration and baleen varies, depending on their geographic location, but they can weigh up to 20,000 pounds and reach lengths of up to 35 feet.