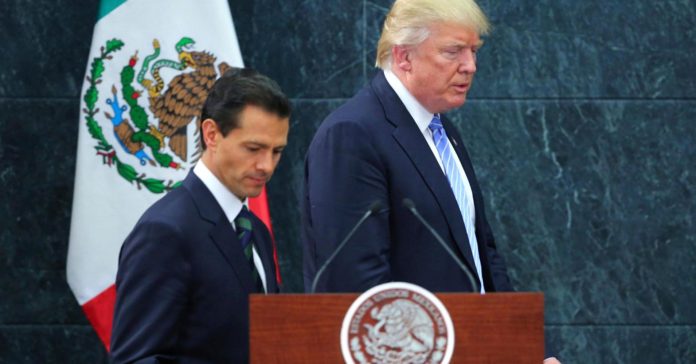 President Donald Trump threatened Thursday to cancel a meeting with Mexican President Enrique Pena Nieto after Pena Nieto reiterated that Mexico would not pay for a border wall and suggested he could back out of the meeting.

The two leaders were scheduled to meet next Tuesday to discuss trade and immigration. After Trump signed two executive orders Wednesday aiming to crack down on immigration from America’s southern neighbor, Pena Nieto said he would consult with Mexican officials to decide “next steps,” but did not say outright that he would not attend the meeting.

On Thursday morning, Trump responded on Twitter, first criticizing America’s trade relationship with Mexico. He added that “if Mexico is unwilling to pay for the badly needed wall, then it would be better to cancel the upcoming meeting.”

Trump tweet 1: The U.S. has a 60 billion dollar trade deficit with Mexico. It has been a one-sided deal from the beginning of NAFTA with massive numbers…

Trump tweet continued: of jobs and companies lost. If Mexico is unwilling to pay for the badly needed wall, then it would be better to cancel the upcoming meeting.

Trump on Wednesday signed an executive order directing the construction of a physical wall along the U.S.-Mexico border, following through on a key campaign promise. The U.S. will fund the wall, which is estimated to cost $8 billion or more, though Trump has maintained that Mexico will reimburse the cost. Senate Majority Leader Mitch McConnell said Thursday that the GOP-controlled Congress has projected a $12 billion to $15 billion cost.

“We’ll be reimbursed at a later date from whatever transaction we make from Mexico,” Trump told ABC News on Wednesday. “I’m just telling you there will be a payment. It will be in a form, perhaps a complicated form. What I’m doing is good for the United States. It’s also going to be good for Mexico. We want to have a very stable, very solid Mexico.”

Responding to Trump’s actions in an address to the nation, Pena Nieto repeated that Mexico will not pay for the barrier, as he did when Trump was a candidate.

“I have said it over and over again. Mexico will not pay for any wall,” he said.

— NBC News contributed to this report