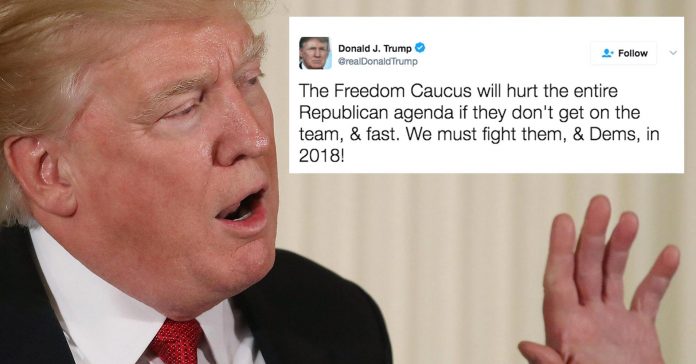 Trump’s broadsides come at a fragile time for Republicans, who failed to follow through on a key campaign promise last week despite holding both chambers of Congress and the White House. House GOP leaders failed to gather support from Freedom Caucus members, as well as some key moderate Republicans.

They now face a possible challenge in trying to unify behind a tax reform plan, their next legislative priority, and another possible attempt to repeal the Affordable Care Act.

Asked about Trump’s earlier tweet Thursday, House Speaker Paul Ryan said he understood Trump’s “frustration” with the Freedom Caucus but said he is encouraging House Republicans to try to come to an agreement on health care.

“I understand the president’s frustration. I share frustration. … We’re close,” Ryan told reporters at a news conference. “What I am encouraging our members to do is keep talking with each other until we can get consensus to pass this bill. But it’s very understandable that the president is frustrated, that we haven’t gotten to where we need to go.”

In the days since the health-care bill’s defeat, Trump signaled that he wanted to work with Democrats and holdout members of his party on new legislation that could pass Congress. It is unclear so far if Trump’s threats will make Freedom Caucus members more or less likely to fall in line with party leaders.

Trump faces a historically low approval rating for this point in his presidency, and some Democrats see an opportunity to gain congressional seats in 2018 amid backlash to the president.