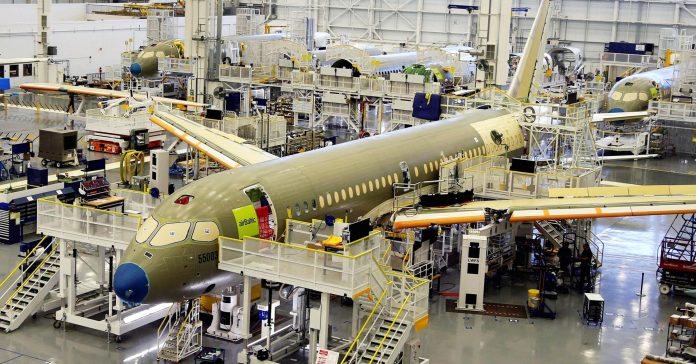 While President Trump has reserved his harshest words on trade for Mexico and China, Canada, one of America’s closest allies, has emerged as a major pressure point on trade, with the countries’ leaders trading barbs over lumber, dairy products, airplanes, and even magazine paper.

In the latest move, the Trump administration imposed a huge tariff on a new aircraft made by Montreal’s Bombardier to compensate for what it deemed unfair subsidies by Canadian governments.

The focus on Canada reflects the complexities that Mr. Trump faces in remaking the global rules of trade.

He has threatened punitive tariffs on imported goods and vowed to bring manufacturing jobs back to the United States. He has promised to level the playing field with China and Mexico.

But aggressively targeting China could disrupt the global supply chain, raising costs for American manufacturers. It could also inflame geopolitical tensions at a time when Washington needs Beijing’s help in dealing with North Korea.

Relations with Mexico are already beleaguered over clashes on immigration, while taking on trade often means taking on exports from plants owned by American corporations.

The sheer volume of trade with Canada makes it an easy target for actions against individual companies or industries. And the economy’s relatively small size, along with its economic and military dependence on the United States, gives Canada little strength for punching back.

The Bombardier case is just one in a long series of trade-related actions. Canada is rehashing the North American Free Trade Agreement, throwing the future of its businesses and workers into flux. The United States has imposed duties on softwood lumber, one of Canada’s most iconic exports, while weighing measures that would clamp down on Canadian exports of steel, aluminum and solar panels.

“Canadians view this as poking Canada in the eye,” said Jerry Dias, the head of Unifor, the country’s large private sector union, which represents some Bombardier workers. “Canadians who view the U.S. as our natural ally are now wondering what’s going on.”

The trade case against Bombardier, which was brought by the American aerospace giant Boeing, is typically a dry and routine affair. It centers on government subsidies and accusations of unfairly low sales prices.

But now trade is politically charged.

Prime Minister Justin Trudeau of Canada has asked the American president to intervene to persuade Boeing to drop the case against Bombardier. Prime Minister Theresa May of Britain joined the chorus of criticism against the United States, since the wings for the aircraft, the CSeries, are made in Northern Ireland. It also soured the mood for the latest round of Nafta negotiations, which finished on Wednesday in Ottawa.

Speaking from the conclusion of the talks, Chrystia Freeland, Canada’s foreign affairs minister and the lead minister on the Nafta talks, said the country would “fight very, very hard” when it came to Bombardier. Ms. Freeland said she had raised the issue with Robert Lighthizer, the United States trade representative.

“I do want to remind Canadians that aggressive actions and aggressive decisions by commerce are nothing new,” she added, a reference to the United States Commerce Department, which imposed the tariff on the Bombardier aircraft. “They are certainly familiar to us from the softwood lumber dispute.”

After an official visit to China, Wilbur Ross, the secretary of commerce, told a group of reporters in Hong Kong on Wednesday that Boeing had initiated the case, not the Trump administration. But he nonetheless emphasized that it was emblematic of the president’s aggressive posture on trade.

Mr. Ross said the administration had been “much more enforcement oriented” than its predecessors. “I wouldn’t be surprised if that trend continues,” he said.

For Bombardier, the decision to impose tariffs of more than 200 percent on the CSeries aircraft creates huge uncertainty for a company that was betting on the product to improve its fortunes.

The duties could be increased or ultimately eliminated in a series of rulings in the coming months. But they go into force immediately, tripling the jet’s price in the United States and most likely chilling future sales in the market it was meant to serve.

Such trade actions could have a spillover effect. Bombardier estimates that work related to the new airliner will eventually create 22,000 jobs at American suppliers, in states like Kansas and West Virginia. The company employs 4,300 aerospace workers in Northern Ireland and 17,000 in Canada.

“I don’t know why they are doing what they are doing in the United States, but I’m worried that it might hit us here,” said Nathalie Leclerc, a bartender in Montreal, Bombardier’s hometown. “Bombardier might cut jobs and production.”

While international trade rules limit Canada’s ability to retaliate, Mr. Trudeau has been trying to use a military deal to influence Boeing. The prime minister has repeatedly suggested that Canada would not close a 6.4 billion Canadian dollar ($5.2 billion) deal to buy F-18 fighter jets from Boeing if it continued with its Bombardier complaint.

There are currently no active trade cases in Canada involving American imports. But the United States administration is considering a range of actions that could ensnare Canadian exports.

Along with cases against Canadian lumber and Bombardier, the United States has imposed tariffs for illegal subsidies on magazine paper. It is also weighing sweeping restrictions on Canadian exports of steel and aluminum, as well as solar products.

The Bombardier ruling heightened tensions at the Nafta talks. Even before the decision, Canadian officials already appeared frustrated by American negotiators’ failure to put forward specific text on some of the president’s proposals.

“Without a formal position tabled, we can’t respond to it,” Ms. Freeland said.

Mr. Lighthizer said that the United States had discussed all of its goals with Canada and Mexico and was preparing in the next round to propose specific wording on more difficult topics, like requiring more goods to be made in the United States.

Chad Bown, a trade analyst at the Peterson Institute for International Economics, said the Trump administration may see conflicts like those over airplanes and softwood lumber as additional points to be traded away at the negotiating table.

“The Trump administration may see this as a type of leverage in Nafta,” he said. “Now they have a potential bargaining chip that they didn’t have before to try to extract something from Canada.”

But the disputes combined with Mr. Trump’s protectionist approach may be prompting questions in Canada about the value of trade deals.

“Canada, in general, has gone from trade skeptical to trade embracing,” said Shachi Kurl, the executive director of the Angus Reid Institute, a nonprofit polling organization. “Now things have swung back a little bit.

The frustrations go back decades.

When Canada entered a trade agreement with the United States in 1989 that was expanded later into Nafta, the lumber dispute was also active. The Conservative government at the time promised that the deal would free Canada from such trade cases. It ended up with a system known in Nafta as Chapter 19, which allows parties to appeal the type of duties that were imposed on Bombardier.

As part of the current negotiations, the Trump administration wants to eliminate that measure. Given the Bombardier outcome, Canada’s opposition is likely to become more entrenched.

“We have forest workers and forest-dependent communities saying why does this keep happening to us?'” John Horgan, the premier of British Columbia, said of the softwood lumber spat, which is in its fifth round since 1982. Canada has ultimately been successful in all of them to date.

At the restaurant in a Husky gas station in Williams Lake, British Columbia, a lumber town, there was resignation and irritation about going through the trade dispute all over again.

“The softwood lumber deal? That’s a Trump thing,” said Charlie Grover, who drives a lumber truck. “We know that they won’t win in court. So eventually we’ll be back to no tariff.”