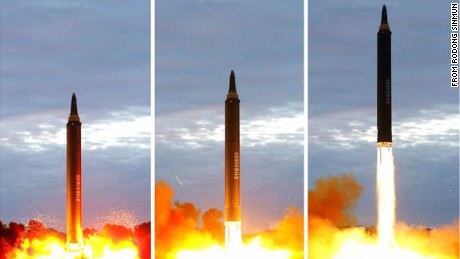 “The U.S. has been talking to North Korea, and paying them extortion money, for 25 years. Talking is not the answer!” Trump tweeted, just days after North Korea launched a missile that flew over northern Japan.

It was not immediately clear what Trump meant by “extortion money,” though previous administrations have tried to defuse nuclear tensions by offering the North Korean regime food and aid packages, some of it in exchange for Pyongyang’s commitment to curb its nuclear programs — promises that have always been broken.

The North Korean launch was “the first step of the military operation of the (North Korean military) in the Pacific and a meaningful prelude to containing Guam,” North Korean state media said, doubling down on Pyongyang’s threats in early August to strike the US territory, home to a large US military base.

Trump’s chest thumping suggestion that some undefined action — not talk — is needed is just the latest signal sent by the President that seems to contradict the Cabinet officials most involved in finding a way to defuse a nuclear showdown in a region that’s home to billions, vital to the global economy, and the location of strategic US military bases

While some US officials hint that it might be part of a good cop, bad cop effort to increase pressure on North Korea, one former US official said the administration’s signals are too incoherent for that to be likely.

“The idea that this is part of a “good cop, bad cop” strategy seems to be an attempt to excuse the reality that the Trump administration is in chaos when it comes to North Korea,” said Abraham Denmark, a former assistant secretary of defense for East Asia, who sees no coherent administration strategy on Pyongyang.

“If the President has made up his mind against talks with North Korea, that should be the end of the conversation,” Denmark said. “This dramatically undercuts the State Department – any offer of talks to North Korea has zero credibility if the President is not on board.”

And without a decision on whether talks will be pursued, “no diplomacy or military decision can be made,” Denmark said. And he adds another thought. “The President’s tweet left an obvious question go unanswered: if the President feels talks will not solve this issue, what does he believe will solve it?”

Trump spoke in early August of visiting “fire and fury” on North Korea if it so much as threatened the US — which it promptly did. He issued that threat as Secretary of State Rex Tillerson continued to emphasize a “peaceful pressure” campaign aimed at systematically cutting off Pyongyang’s sources of financial and diplomatic support.

“We do view it as a provocative act against the United States and our allies,” Tillerson told “Fox News Sunday,” after North Korea fired three short range missiles on Friday [Aug 25]. “We’re going to continue our peaceful pressure campaign as I have described it, working with allies, working with China as well to see if we can bring the regime in Pyongyang to the negotiating table.”

Asked if the US was out of diplomatic solutions when it comes to North Korea, Mattis simply replied, “No.”

He then elaborated, “We’re never out of diplomatic solutions. We continue to work together and the minister and I share a responsibility to provide for the protection of our nations, our populations and our interests, which is what we are here to discuss today, and look for all the areas with we can collaborate.”

As North Korea hones its ability to deliver nuclear weapons far enough to reach US territory, some analysts and US officials suggest that the tough talk from Trump isn’t a contradiction of his most senior officials, but part of a plan to ratchet up pressure.

“There’s no shift away from the pressure strategy,” said Bruce Klingner, a former CIA deputy division chief for Korea who is now a senior research fellow at the Heritage Foundation. “The administration is affirming what every new administration has said — negotiations have been tried and they have failed.”

One US official, speaking on condition of anonymity to discuss North Korea strategy, said that in the administration’s view, “economic, diplomatic, military, all of these options are on the table.” While Tillerson works on increasing financial pressure on the DPRK and isolating it further, Trump’s role might be to apply the diplomatic pressure with his angry, tweeted denunciations.

Trump, the official said, “is making it very clear: North Korea needs to choose a new path.” But the official added that in order to reach the US goal of a nuclear free Korean peninsula, “we will continue to increase the weight of our peaceful pressure campaign.”

That campaign, spearheaded by Tillerson, is about exerting maximum economic pressure on North Korea by severing its trade ties with other countries, and increasing its diplomatic isolation. Speaking to the UN in April, the top US diplomat delivered a message about North Korea’s nuclear programs that was a gentler version of Trump’s angry tweet.

“For the past 20 years, well-intentioned diplomatic efforts to halt these programs have failed,” Tillerson said. “the policy of strategic patience is over.” He added, “The more we bide our time, the sooner we will run out of it.”

Anthony Ruggiero, a former deputy director of the US Treasury Department, suggests that Trump’s more recent rhetoric might have a particular aim.

“The exchange of words between North Korea and the US would not prevent Pyongyang from continuing its missile tests,” said Ruggiero, an expert on the use of targeted financial measures for the Foundation for Defense of Democracies. “The goal was deterring North Korea from launching missiles toward Guam or attacking South Korea, which has not happened.”

North Korean officials told CNN in Pyongyang that Kim was “very satisfied with the performance of the missile.”

The intermediate-range missile, identified by the North Koreans as the Hwasong-12, flew over Japan, further fueling tensions between North Korea and the United States and its allies, Japan and South Korea.

“The world has received North Korea’s latest message loud and clear: this regime has signaled its contempt for its neighbors, for all members of the United Nations, and for minimum standards of acceptable international behavior,” Trump said in an initial statement on Tuesday, taking a more measured tone than in his previous remarks or in the tweet he’d send Wednesday.

“Threatening and destabilizing actions only increase the North Korean regime’s isolation in the region and among all nations of the world. All options are on the table.”

Early Wednesday, the US conducted a test intercept of a medium range ballistic missile off the coast of Hawaii, according to a statement from the US Missile Defense Agency.

This story has been updated