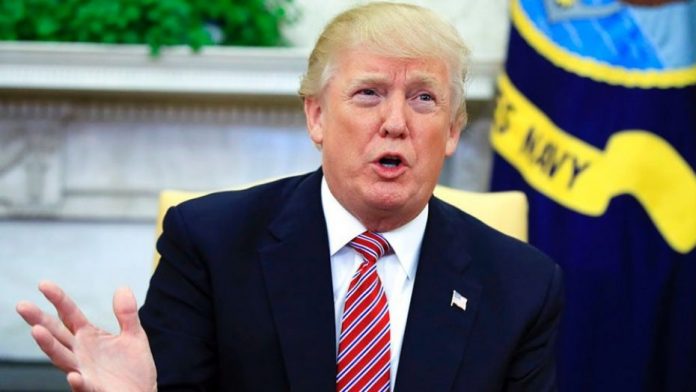 President Trump poked a finger in the eye of Senate Democrats Friday by accusing them of abandoning illegal immigrants brought to the U.S. as children — a day after multiple attempts at immigration reform crashed on the floor of the Senate.

Trump took to Twitter to say those eligible for protection under the Deferred Action for Childhood Arrivals program had been “totally abandoned” by Democrats, while Republicans are “still working hard.”

It was Trump himself who in September repealed the Obama-era executive order — fulfilling a campaign promise. However, he set a March expiration date and immediately called for Congress to “legalize” the program.

A Trump-backed plan that met the “four pillars” Trump had demanded mustered only 39 votes in the Senate — well short of the 60 required and the least votes of the four plans voted on.

A bipartisan plan drawn up by a “Gang of 22” that would grant a 10-12 year path to citizenship for DACA recipients, while also dribbling out $25 billion for border security over 10 years, also failed after fierce criticism from the Trump administration.

Ahead of the vote, the DHS warned the plan would mean the “end of immigration enforcement in America” and said it would turn the U.S. into a “sanctuary nation.”

The bill did not end chain migration, nor would it have ended the visa lottery — two of Trump’s four pillars. Additionally, the DHS criticized a measure that would protect illegal immigrants who arrived in the country before January.

Trump urged senators not to support the bill saying it would be a vote “AGAINST law enforcement, and a vote FOR open borders.”

Senators also blocked a plan by Sen. John McCain, R-Ariz., and Sen. Chris Coons, D-Del., which would allow DACA recipients to qualify for permanent residency and would direct agencies to control the border by 2020.

Another plan offered by Sen. Pat Toomey, R-Pa., that would block federal grants to sanctuary cities that do not cooperate with federal authorities on illegal immigration also failed to pass a test vote.