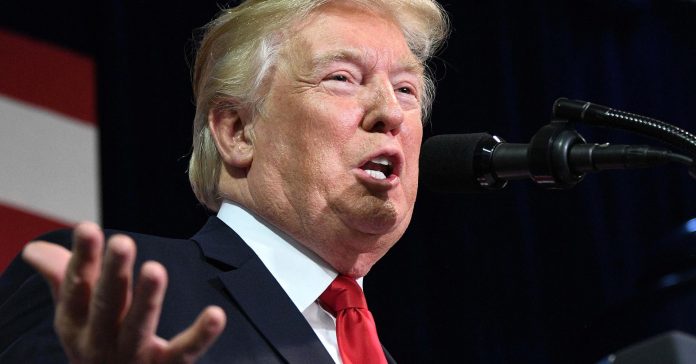 He urged congressional Republicans and Democrats to pass a tax reform plan that he said would boost wages and increase the money that flows into workers’ pockets. But, as with Obamacare repeal earlier this year, Trump framed tax reform as mostly lawmakers’ responsibility to accomplish.

“What could possibly be more bipartisan than allowing Americans to keep more of what they earn and creating an environment for real job and wage growth in the country that we love so much?” he asked.

The president made the case for his key agenda item after Republicans failed to repeal and replace Obamacare — another major Trump promise — amid party infighting this year. GOP lawmakers aim to start working a still undisclosed plan through Congress when they return next month, and hope to have it signed into law by the end of the year.

While the White House has not proposed a specific plan, it has given an outline of priorities, including chopping corporate and individual income tax rates, using a one-time repatriation tax on corporate profits overseas, removing many deductions and moving to a more “territorial” tax system.

On Wednesday, Trump highlighted several key goals for his tax-reform push: making the tax code simpler and more fair, reducing the tax burden on U.S. companies, cutting rates for middle-income Americans and bringing back cash parked overseas. He did not detail potential policies and rates, beyond saying he wants a 15 percent corporate tax rate, down from the current 35 percent.

Trump claimed that lowering rates for businesses will boost job growth and wages for workers. But it is not clear that cutting business tax rates creates more jobs, as Trump and other have argued.

The president also framed his plan as helping middle class Americans rather than entrenched, elite interests. But various analyses of the proposals he released as a candidate said they would help the wealthy the most.

Trump framed tax reform as an issue that Democrats can support. Nearly all Democrats will likely oppose the GOP plan if it includes major tax cuts for the wealthiest Americans.

Republicans, who plan to use a budget mechanism that will not require any Democratic votes to pass a tax bill, still see the potential to win over some Democrats in red states who face re-election next year. One of those lawmakers is Sen. Claire McCaskill, D-Mo.

On Wednesday, Trump upped the pressure on her, even urging Missouri voters to vote her out if she does not support a tax overhaul.

A spokesman for McCaskill did not immediately respond to CNBC’s request to comment.

During the speech, Sen. Ron Wyden, D-Ore., the ranking member on the Senate Finance Committee, said the White House has not reached out about working with Democrats on tax reform.

After Trump spoke, key Republicans like House Speaker Paul Ryan and Senate Majority Leader Mitch McConnell — who Trump has publicly criticized recently — also tweeted their support for tax reform. They did not give any new details.

In his tweeted statement, Ryan said that the White House and Congress “are in sync.”

When Trump started speaking, he thanked Treasury Secretary Steven Mnuchin, Commerce Secretary Wilbur Ross and multiple members of Congress for their work on tax reform. Notably, he did not mention chief economic advisor Gary Cohn, who, along with Mnuchin, has represented the Trump administration in tax reform meetings with congressional leaders.

Cohn recently said that Trump should have gone further in condemning white nationalists after violence at a rally in Virginia. He even drafted a resignation letter, which he did not submit, following the president’s response to the event.