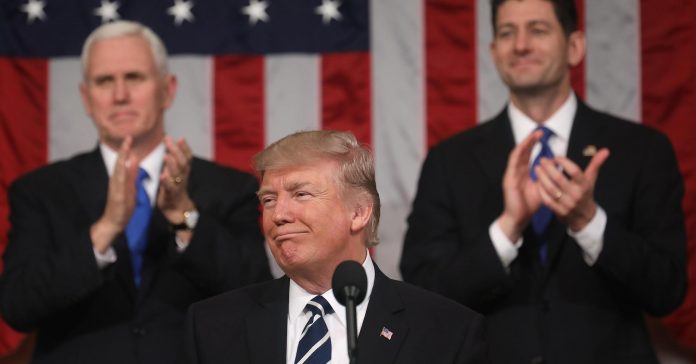 President Donald Trump on Tuesday delivered his State of the Union address to the nation. The president sought to strike a positive tone and describe a “New American Moment” characterized by prosperity, rebuilding and cooperation.

The official theme of the speech was “a safe, strong and proud America,” and Trump aimed to take a victory lap for his newly enacted tax cuts, and for the overall strength of the U.S. economy.

“Since we passed tax cuts, roughly 3 million workers have already gotten tax cut bonuses – many of them thousands of dollars per worker,” Trump said.

Trump also promoted his administration’s deregulation efforts, which he characterized as part of a broader plan to, “restore the bonds of trust between our citizens and their government.” These same regulations, according to the president, are also standing in the way of a major infrastructure rebuilding plan.

On the lightning rod topic of immigration, the president’s message emphasized inclusivity and bipartisanship. “Tonight I am extending an open hand to work with members of both parties, Democrats and Republicans, to protect our citizens, of every background, color, and creed,” Trump said.

On trade, however, the president delivered practically the opposite message: America first means an end to U.S. participation in large, multilateral treaties and a more robust pushback against unfair trade practices by other nations.

“As we rebuild America’s strength and confidence at home, we are also restoring our strength and standing abroad,” the president said.

“Last year, I pledged that we would work with our allies to extinguish ISIS from the face of the earth. One year later, I’m proud to report that the coalition to defeat ISIS has liberated almost 100 percent of the territory once held by these killers in Iraq and Syria,” Trump said while pledging to “continue our fight until ISIS is defeated.”

Trump appeared to save the most urgent national security threat, North Korea, for last. “Past experience has taught us that complacency and concessions only invite aggression and provocation,” Trump said. “I will not repeat the mistakes of the past Administrations that got us into this dangerous position.”