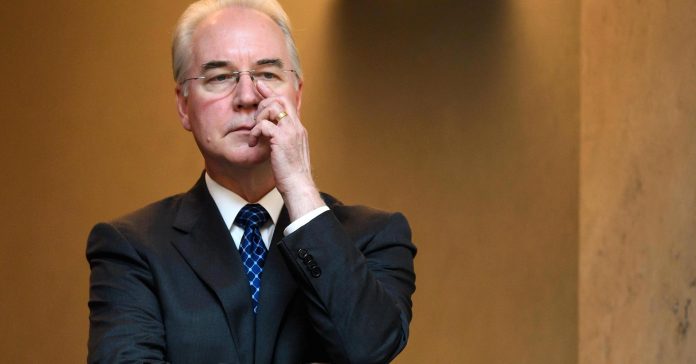 “I have spent forty years both as a doctor and public servant putting people first. I regret that the recent events have created a distraction from these important objectives,” Price wrote.

In June, Price traveled on a $17,760 roundtrip charter from Washington to Nashville, Tennessee, Politico revealed. He spent less than six hours there, making two official appearances and eating lunch with his son.

In a four-day stretch in September, Price took flights costing an estimated $60,000 in total, according to Politico. Some of those flights came at times when dramatically cheaper commercial air travel would have been available.

Politico on Thursday reported that Price had also taken trips overseas using military jets, at a cost of more than $500,000 — putting the total tab for his penchant for pricey travel above $1 million.

Also Thursday, BuzzFeed News reported that Price had asked a White House official soon after taking office to tell Trump that he wanted to reopen the executive dining room at HHS, which had been closed since George W. Bush was president.

Price, who only became health secretary in February, was reportedly already on thin ice with top officials in the Trump administration when the controversy exploded over his pricey jet jaunts.

Those officials believed he did not do enough in recent weeks to support an ultimately doomed, last-ditch effort in Congress to repeal and replace major parts of the Affordable Care Act, or Obamacare.

Price’s department for months has been taking steps to undercut that major health-care law — gutting advertising budgets designed to promote enrollment in Obamacare plans, suspending joint efforts with state-level groups to encourage insurance sign-ups and bad-mouthing Obamacare at every opportunity.

But he was noticeably absent at meetings to promote the passage of the Senate repeal bill, Graham-Cassidy, in September, Politico reported. That bill would have dramatically slashed federal spending on subsidizing health insurance coverage for Americans.

On Wednesday, President Donald Trump told reporters “I am not happy about” Price’s use of private planes, “and I let him know it.”

Price on Thursday had tried to tamp down the controversy by saying he would repay the government for the cost of “my seat” on the charter flights. Price said he will pay about $52,000 of the more than $400,000 taxpayer tab for his private trips.

The offer was immediately met with derision by critics who said Price was shortchanging taxpayers.

The 62-year-old Price, a former House member from Georgia, was a prominent critic of Obamacare while serving in Congress.

He also had billed himself as a staunch fiscal conservative with a record of pushing for government spending discipline.

Price leaves the Trump administration after the latest in an unsuccessful string of Republican attempts to repeal and replace the Affordable Care Act.

Following the announcement, House Speaker Paul Ryan said in a statement that Price is a good man who “has spent his entire adult life fighting for others, first as a physician and then as a legislator and public servant.”

“He was a leader in the House and a superb health secretary. His vision and hard work were vital to the House’s success passing our health care legislation. I will always be grateful for Tom’s service to this country and, above all, his continued friendship,” Ryan said.

His departure also comes amid broader concerns about the ethical standards of the Trump administration and its top officials.

While Price has said he received prior approval from legal and HHS advisors for his private flights, his use of charters was in stark contrast to that of his two immediate predecessors as chief of HHS, Sylvia Burwell and Kathleen Sebelius, who took commercial flights to domestic engagements.

Environmental Protection Agency Administrator Scott Pruitt also has racked up a $58,000 bill on noncommercial and military flights since mid-February, according to The Washington Post. He took one charter trip and three government flights, all approved by the EPA ethics office. Pruitt traveled on a charter plane after a commercial flight was delayed.

In a letter to Trump on Thursday, Sen. Chuck Grassley, R-Iowa, pointed out that “federal regulations specifically prohibit official travel by chartered jet when it is not the most cost-effective mode of travel ‘because the taxpayer should pay no more than necessary for your transportation.'”

Grassley asked Trump to urge his Cabinet secretaries to use “reasonable and cost-effective modes of travel.”

The senator noted that in addition to questions about the travel habits of Price and Pruitt, the inspector general of the Treasury Department is investigating the travel expenses of Treasury Secretary Steven Mnuchin.

During his Senate confirmation hearings as HHS secretary, Price was criticized for having traded more than $300,000 worth of about 40 health-care stocks in the previous four years, which involved companies that could have benefited from legislation he favored as a House member.

For one of those companies, the small Australian biotech firm Innate Immunotherapeutics, Price was offered the opportunity to buy shares at a discount, while sitting on a committee that could affect the financial outlook of the firm.

Price eventually sold his stake in the company during the HHS confirmation process and made a profit of at least $225,000 on a $94,000 investment, according to The Wall Street Journal.

Price during his Senate hearings denied that he invested using nonpublic information.

“Everything that we have done is absolutely aboveboard, transparent, legal and ethical,” he said at the time.