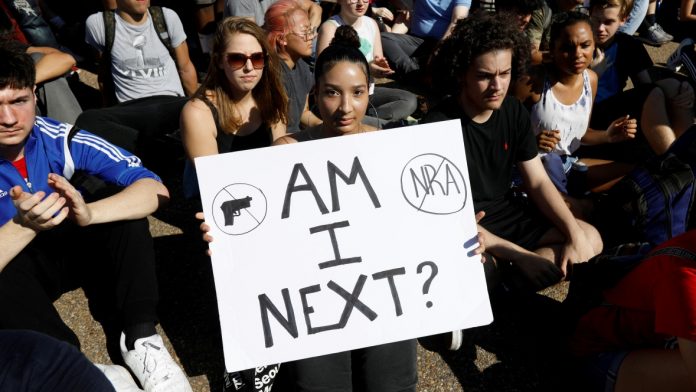 Young people in the U.S. walked out of school to demand action on gun violence Wednesday in what activists hoped would be the biggest demonstration of student activism yet in response to last month’s massacre in Florida.

More than 3,000 walkouts were planned around the world, organizers said. Students were urged to leave class at 10 a.m. local time for 17 minutes — one minute for each victim in the Feb. 14 attack at Marjory Stoneman Douglas High School in Parkland.

Thousands of students gathered on Pennsylvania Avenue in front of the White House, holding colourful signs and cheering in support of gun control.

U.S. President Donald Trump was travelling in Los Angeles at the time.

Stoneman Douglas High senior David Hogg livestreamed, on his YouTube channel, the walkout at the school. Walking amid a mass of people making their way onto the football field, he criticized politicians for not taking more action to protect students.

He said the students could not be expected to remain in class when there was work to do to prevent gun violence.

Other protests planned for coming weeks

From Florida to New York, students poured out of their schools, marching through the streets or gathering on campus to demonstrate.

Some schools applauded students for taking a stand or at least tolerated the walkouts, while others threatened discipline.

The co-ordinated walkout was organized by Empower, the youth wing of the Women’s March, which brought thousands to Washington last year.

Although the group wanted students to shape protests on their own, it also offered them a list of demands for lawmakers, including a ban on assault weapons and mandatory background checks for all gun sales.

“Our elected officials must do more than tweet thoughts and prayers in response to this violence,” the organization said on its website.

Other protests planned in coming weeks include the March for Our Lives rally for school safety, which organizers say is expected to draw hundreds of thousands to the nation’s capital on March 24. Another round of school walkouts is planned for April 20, the 19th anniversary of the Columbine High shooting in Colorado.

The walkouts drew support from companies including media conglomerate Viacom, which planned to pause programming on MTV, BET and all its other networks for 17 minutes during the walkouts.

Districts in Sayreville, N.J., and Maryland’s Harford County drew criticism this week when they said students could face punishment for leaving class.

In suburban Atlanta, one of Georgia’s largest school systems announced that students who participated might face unspecified consequences. Some vowed to walk out anyway.

The possibility of being suspended “is overwhelming, and I understand that it’s scary for a lot of students,” said Lian Kleinman, a junior at Pope High. “For me personally, this is something I believe in. This is something I will go to the ends of the Earth for.”