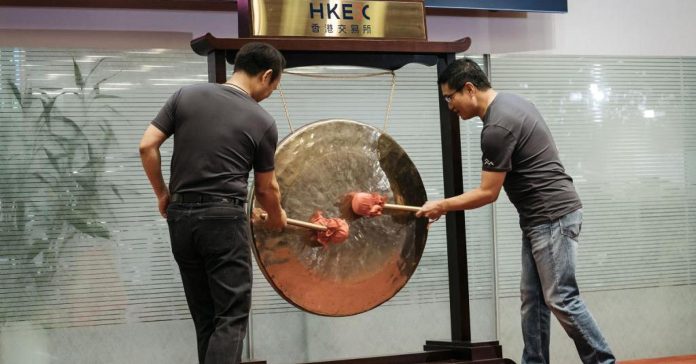 The performance of ZhongAn Online’s listing could potentially influence sentiment for IPO markets in the region ahead, one expert said.

“[T]he IPO market right now is really hot, with some large deals that will give the catalyst for some other good companies to come over to Hong Kong,” Ringo Choi, Asia-Pacific IPO leader at EY, told CNBC’s “Capital Connection” on Thursday.

In Hong Kong specifically, one factor fueling IPO markets has been the flow of capital from the mainland, Choi said. “In general, a lot of money is from China. This is a continuous chunk of money that is moving from China to Hong Kong or other places, especially as they have outbound initiatives,” he explained.

Indeed, Hong Kong may even be attracting U.S. companies. The Wall Street Journal reported on Wednesday, citing a person familiar with the matter, that Burbank, Calif.-based STX Entertainment, a three-year-old Hollywood studio, was aiming to raise around $500 million in a Hong Kong listing in the first quarter of next year.

Hedge funds from the U.S. and other countries were also bringing money to Hong Kong to buy assets they believed were undervalued, Choi added.

Heading into the last quarter of the year, IPO activity looks set to remain robust in greater China markets.

“I think the fourth quarter is surely one of the strongest … for most of the Chinese companies. They will rush to complete their IPOs,” Choi said. Listings in the education, consumer products and fintech sectors were likely in Hong Kong in the fourth quarter, he added.

On the whole, IPO markets this year have shown marked improvement. Global IPO volumes year to date have already surpassed last year’s figure, according to EY.

Last year was a relatively sluggish one for IPOs in the U.S. after fewer large companies went public than expected. That slowdown in 2016 had been attributed various factors, including uncertainty surrounding the U.S. election and Brexit.