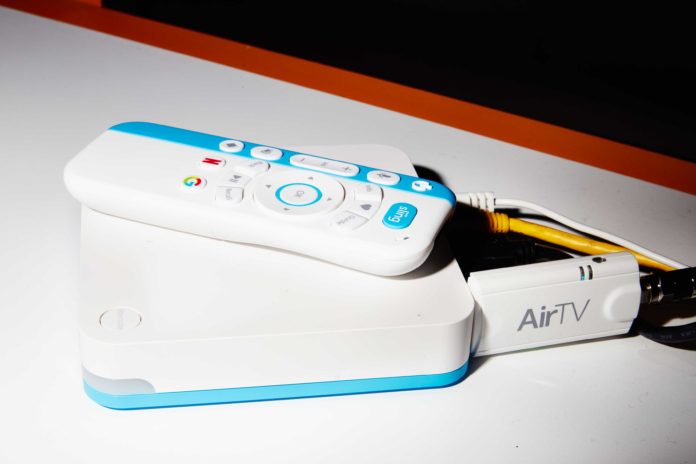 Here’s what cord-cutting utopia looks like: As soon as you turn on the TV, an onscreen guide offers a menu of live cable, local broadcast networks, and your favorite shows from Netflix, Amazon Video, and the like. And you can surf from one to the other at whim, like a tourist crossing borders without dealing with customs.

This fantastic world does not exist, of course, and it may remain a dream. Untangling the rights and distribution of all that content is more than arduous, it’s simply not economically viable for anyone involved.

Still, two clever devices unveiled at CES this week bring that vision of cord-cutting heaven a bit closer to reality by putting everything you could ever want to watch in one place, in one cohesive interface.

Historically, the biggest impediment to ditching cable has been live sports. That makes sense, because aside from awards show and the occasional must-see series, there isn’t a lot that won’t keep a day or three. But there’s no point in watching the Orioles play after they’ve played. It’s history, and another game is on tomorrow.

That hurdle’s gotten easier to clear as the professional leagues sell streaming packages (albeit with restrictive blackout rules) and ESPN appears on services like Sling and PlayStation Vue.

That leaves local broadcast TV. Access to NBC, ABC, and all the rest remains the biggest impediment to cutting the cord for good. Parks Associates recently found that 55 percent of cable subscribers said they’d have a hard time giving up local broadcast television. Giving up sports was a distant second. The irony here is that these stations are supposed to be available for free.

Yes, some streaming services offer some local stations to some markets. But national availability is impractical if not impossible, because your local NBC affiliate likely isn’t owned by NBC. It’s owned by one of several regional networks, and all the rights are still being sorted out.

That means ditching cable but keeping your local news and weather—and popular programming like Today—has required using an antenna. Ugh. That’s a hassle for all but the most tech-savvy. “It’s not that easy for the average consumer,” says Dan Rayburn, the streaming expert at Frost & Sullivan.

Even if you do get it to work, do you really want to switch inputs just to change from Sling to ABC so you can watch The Bachelorette.

Actually, you don’t have to do that anymore.

Switching from one device to another seems like a small burden, but it “is a very big deal for a lot of households,” says Mark Buff, founder and CEO of Mohu. His company is a leading manufacturer of antennas, and this week it introduced the AirWave, a $150 wireless antenna that brings broadcast TV to Apple TV, Roku, or any other streaming device.

AirWave pulls in a broadcast signal like any antenna, but from anywhere in your home. No need for an ungainly cord. More importantly, it pushes live content to an app that lives alongside Netflix, Amazon Video, Sling, and others. Live TV becomes just another app.

Joining AirWave at CES this week is AirTV, a streaming box that requires a separate external antenna for broadcast TV, but serves as a central hub for SlingTV (which, like AirTV, is owned by satellite TV provider Dish), local channels, and any Android TV apps you care to toss in. Once again, your city’s broadcast affiliate finds parity with popular streaming options.

The two devices are technologically very different. AirWave may be more revolutionary, given that it literally cuts a cord and plunks live broadcast TV into a streaming box you already own. But AirTV has broader significance. Think of it as a blueprint for what the future of cordcutting could look like.

“What we really want to do is spark the whole ecosystem of devices to embrace us,” says Roger Lynch, CEO of Sling TV. “We’re not trying to rule the world with this device. We’re just trying to spark interesting things that ultimately will be beneficial for consumers and beneficial for Sling.”

Realistically, these devices won’t be the cow that tips the lantern that starts the fire that burns down the cable TV industry. “They’re niche offerings,” says Rayburn.

They’re also not perfect. When AirWave launches this spring, it will transmit exactly one channel at a time, regardless of how many TVs you have. AirWave also converts the high data-rate broadcast signal into a lower-rate format so it lives happily on Apple TV and doesn’t kill your Wi-Fi network. Theoretically, that could degrade the picture, although Buff says you won’t see a difference.

As for AirTV, you still need a wired antenna, and it exists mostly to push people toward Sling TV.

Still, eliminating one of the most annoying things about cutting the cord represents a sea change. It’s easier than ever to ditch cable, regardless of how many people actually do. As Glenn Hower, an analyst at Parks Associates, says, that’s a good thing.

Plenty of barriers still remain. But one of the biggest has fallen.