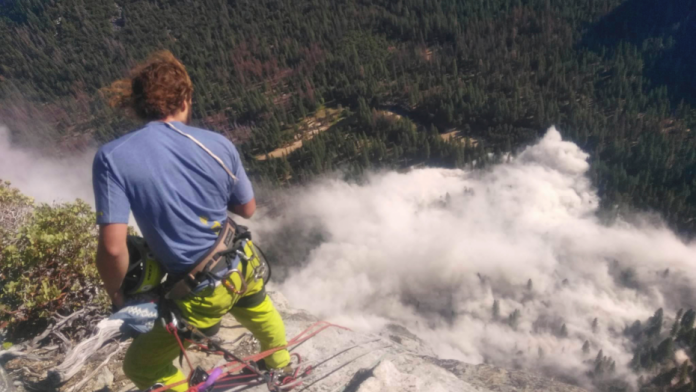 SAN FRANCISCO –  The Latest on two rock falls in Yosemite that killed one and injured two others (all times local):

A man injured when a second massive rock fall plunged in Yosemite National Park was driving out when rock and rubble broke through the sunroof of his SUV, hitting him in the head.

Television images show Jim Evans, of Naples, Florida, conscious and his wife holding a jacket around his head.

Fresno television station KSEE reports that Evans was airlifted to a hospital in Modesto, California, and is expected to survive.

Evans’ wife, Rachel Evans, says she and her husband and two other relatives had ended a three-day visit to Yosemite and were leaving Thursday when the rock slide happened.

She says no one else in the car was injured.

Yosemite National Park geologists worked into to the evening to inspect the face of El Capitan, where two major rock falls in two days killed one person and injured two others.

The scientists are trying to determine how big the second rock fall was and how it happened.

Park officials closed one of the exit routes from the park after a massive hunk of granite detached Thursday from the famed rock formation and plunged down, filling Yosemite Valley with dust and injuring a man.

Officials say the rock slide was significantly larger than a chunk of granite the size of a 12-story building that broke free and plunged on Wednesday, killing a British climber and injuring his wife.

British media reports 32-year-old Andrew Foster and his wife were avid climbers who were in Yosemite celebrating their first wedding anniversary.

A huge hunk of granite came off El Capitan on Thursday, even bigger than the major piece of rock that fell off on Wednesday. The second left just one man injured.

The first killed a British man and injured his wife.

Park officials say rock falls like these are common but it’s rare for people to be injured or killed by them.

Climber Ryan Sheridan was at the top of El Capitan when the second chunk fell on Thursday, and said the smoke and debris filled the entire Yosemite Valley.