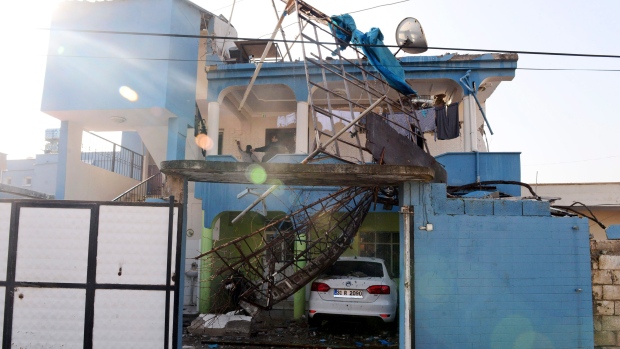 It was the latest in a string of rocket attacks on the border towns of Reyhanli and Kilis since Jan. 20, when Turkey’s military launched a cross-border operation to drive out the Syrian Kurdish militia from the northern enclave of Afrin. Ankara considers the Syrian Kurdish People’s Protection Units, or YPG, an extension of the outlawed Kurdish rebels who have launched several attacks inside Turkey.

Two people were hospitalized after the attack and one, 17-year-old Fatma Avlar, died from her wounds, the agency said. The attacks inside Turkey have so far killed four people, including Avlar. Two of the victims were Syrian refugees.

The Kurdish militia, meanwhile, accused Turkey of firing Katyusha rockets into Afrin, and reported that at least 12 people were wounded from the shelling that targeted the neighbourhood of Ashrafieh. The wounded were brought to Afrin hospital.

A Kurdish girl gestures during a protest against the Turkish attacks on Afrin in Qamishli, Syria on Tuesday. (Rodi Said/Reuters)

The Syrian Observatory of Human Rights, which has monitored the toll in the country, said in a post Wednesday it estimates 67 Syrian citizens have been killed as a result of Turkey’s military operation, including 20 children.

As the operation continues, officials in the U.S.-led international coalition against the Islamic State in Syria and Iraq (ISIS) have warned it could destabilize recent gains against ISIS along the Iraq-Syria border in the Euphrates River valley.

After a visit to a coalition outpost near the Iraq-Syrian border town of Qaim, the top U.S. general in Iraq said Tuesday that he is “very much concerned” the fight in Afrin could remove pressure on pockets of ISIS fighters in other parts of Syria.

“I don’t want our partner to be distracted,” said U.S. Army Lt. Gen. Paul Funk, referring to the U.S.-backed Syrian Kurdish militia fighting ISIS in Syria. “It’s a continual fight [against ISIS] certainly on the Syrian side.”

Iraqi forces declared victory over ISIS in December, but since the Afrin offensive began, Iraq’s border guard has reported increased ISIS activity and attacks along their border with Syria.

If the U.S.-backed Syrian Kurdish forces get deeply entangled in the fighting in Afrin, that could “pull Syrian Democratic Forces out of this area,” said U.S. Army Lt. Col. Brandon Payne, who is stationed in western Iraq, not far from the Syrian border.

A U.S. commitment not to withdraw from Syria could have prompted Turkish aggression against Syrian Kurds. 19:21

Such a scenario “essentially takes the focus off ISIS and gives ISIS manoeuvre space. We don’t want to do that,” he added.

In an interview with French newspaper Le Figaro, Macron said that Turkey must coordinate with allies, and that its operation inside Syria must be limited to fighting terror. Macron added he would talk to Erdogan in the coming days to tell him that the military offensive against Afrin should involve talks “between Europeans, and more widely between allies, because it changes the nature of this Turkish incursion.”

“If it turned out that this operation had to take another turn than an action to fight against a potential terror threat at the Turkish border, and that it was an invasion operation, at that moment, this operation would pose a real problem for us,” Macron said.

“The whole world knows and should know that Turkey does not operate with the mentality of an invader,” Yildirim said, speaking at a joint news conference with visiting Lebanese Prime Minister Saad Hariri.

Russia has made few public statements about Afrin, but withdrew forces from the region before Turkey’s operation began.

Several hundred people, including civilians, have been killed during Turkey’s military operation in Syria’s Afrin,