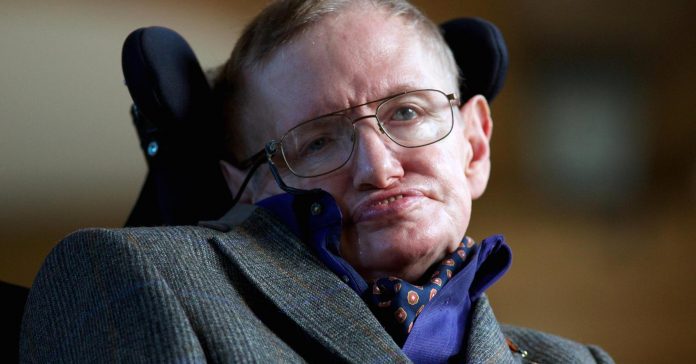 In 1987, Hawking contracted pneumonia. He had to undergo a tracheotomy, which removed even the limited powers of speech he then possessed. It had been more than ten years since he could write, or even use a keyboard. Without speech, the only way he could communicate was by directing his eye towards one of the letters of the alphabet on a big board in front of him.

But he was saved by technology. He still had the use of one hand; and a computer, controlled by a single lever, allowed him to spell out sentences. These were then declaimed by a speech synthesiser, with the androidal American accent that thereafter became his trademark.

His lectures were, of course, pre-prepared, but conversation remained a struggle. Each word involved several presses of the lever, so even a sentence took several minutes to construct. He learned to economize with words. His comments were aphoristic or oracular, but often infused with wit. In his later years, he became too weak to control this machine effectively, even via facial muscles or eye movements, and his communication – to his immense frustration – became even slower.

At the time of his tracheotomy operation, he had a rough draft of a book, which he’d hoped would describe his ideas to a wide readership and earn something for his two eldest children, who were then of college age. On his recovery from pneumonia, he resumed work with the help of an editor. When the U.S. edition of “A Brief History of Time” appeared, the printers made some errors (a picture was upside down), and the publishers tried to recall the stock. To their amazement, all copies had already been sold. This was the first inkling that the book was destined for runaway success, reaching millions of people worldwide.