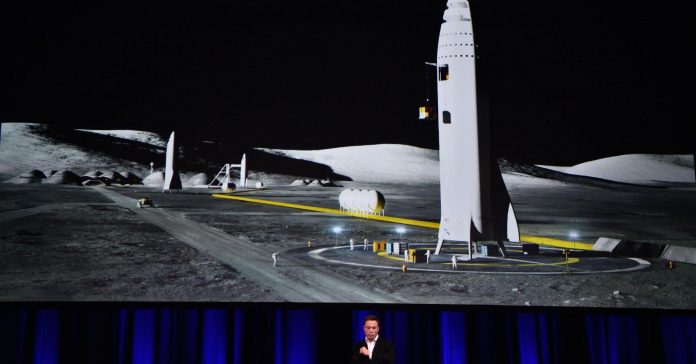 Musk also plans to use the ships to send an uncrewed mission to Mars by 2022.

What’s more, Musk says the ticket price for an intercontinental rocket ride would cost about the same as commercial airline ticket.

As amazing as that development sounds, there are reasons to be skeptical that rockets will ferry people around the planet for so little money any time soon, said John Logsdon, who is professor emeritus at George Washington University’s Elliott School of International Affairs and a faculty member at the university’s Space Policy Institute.

“It is a very attractive prospect, but I think extremely unrealistic in any relevant time frame,” Logsdon told CNBC in an interview.

However, Musk did suggest in his talk that if a ship is capable of flying to other planets, it ought to be capable of flying around the globe. He also highlighted some advantages of rocket travel, such as a lack of turbulence in space.

“If you are building this thing to go the moon and Mars, why not go to other places on Earth as well?” Musk said.

It is worth noting that many of SpaceX’s previous achievements, such as landing a rocket on a ship in the middle of the ocean, were initially met with skepticism.

There have been proposals for these sorts of things before, Logsdon said. For example President Ronald Reagan touted the idea for a spacecraft he called the “new Orient Express” that would carry passengers around the planet. It never materialized.

Passengers on a spacecraft are subject to forces that are as much as five times the force of gravity as they accelerate into space, then are in microgravity or zero gravity for the duration of the flight. They get hit with the g-force again on landing, he said.

“The idea that a typical airline passenger would be able to go through the experience just doesn’t compute,” he said. “Musk calls all of this ‘aspirational’, which is a nice code word for more than likely not achievable.”

However, Logsdon did say Musk’s presence and his work is healthy for the industry overall.

“I think the phenomenon called Elon Musk is fascinating and serves as a kind of beacon of hope that there is a better space future ahead of us,” he said, “and the transition from that beacon to reality will almost certainly take longer than Elon and his supporters hope.”