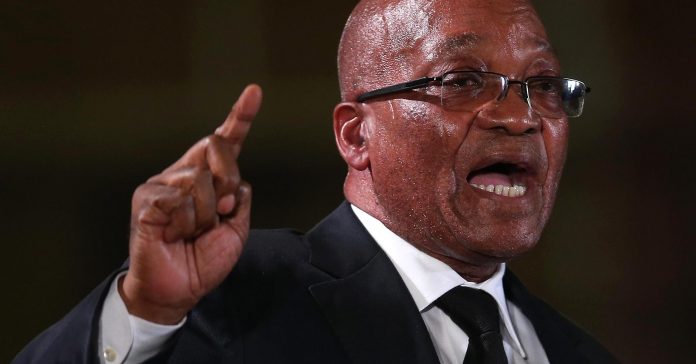 Jacob Zuma is considering offering to step down next year, at least 12 months before his term as South African president ends, under a deal with opponents in his ruling party that would see
Finance Minister Pravin Gordhan leave office now, two senior party sources said.

Zuma is due to be replaced as leader of the African National Congress (ANC) at a party conference in December after serving his allocated two terms, but was expected to remain the country’s president until elections in 2019.

Zuma’s spokesman did not respond to several calls for comment.

The offer appears intended as a way out of an impasse over the country’s leadership within the divided ANC, but may not be enough to satisfy opponents of Zuma, who want the president out early anyway and urgently want Gordhan to stay.

There is precedent for an ANC leader to leave the presidency early. Thabo Mbeki was removed by the ANC as South African president in 2008 after his time as party leader ended at the close of the previous year.

A split in the ANC deepened this week after Zuma ordered Gordhan to return from an investor roadshow in Britain, raising expectations of a cabinet reshuffle that markets fear will include Gordhan’s removal. Gordhan is viewed favourably by investors and the rand fell sharply when he was ordered home.

“Zuma’s early departure after December conference is on the table. It’s being discussed,” one of the sources said. “He could be forcibly removed so it makes sense for him to go on his own terms.”

Zuma’s opponents have become increasingly vocal, and agreeing to stand aside early could help prevent a permanent split in the former liberation movement of Nelson Mandela, which last year suffered its worst result in local elections since it swept to power with the end of apartheid in 1994.

Some senior members of the ANC are pushing for Zuma’s departure now, applying pressure on him to find a compromise.

“He must just go. We don’t need his ‘offers’. He must just go before destroying our country,” one senior ANC member, who had not heard of Zuma discussing stepping down, told Reuters.

Zuma has the authority to hire and fire ministers such as Gordhan, but if senior party figures openly criticise him or resign it would weaken his position in the party.

Zuma and his allies want Gordhan replaced by someone more aligned to their plans which include more radical redistribution of wealth to address the legacies of apartheid and looser fiscal spending, the two sources told Reuters.

Gordhan’s removal is a key requirement in negotiations for Zuma’s faction. They also want to choose Zuma’s successor at the national conference in December, the sources say.

Zuma’s supporters are believed to be backing his ex-wife Nkosozana Dlamini-Zuma, a former African Union chairwoman, as his replacement. Another section of the ANC supports Deputy President Cyril Ramaphosa, viewed as more market-friendly.