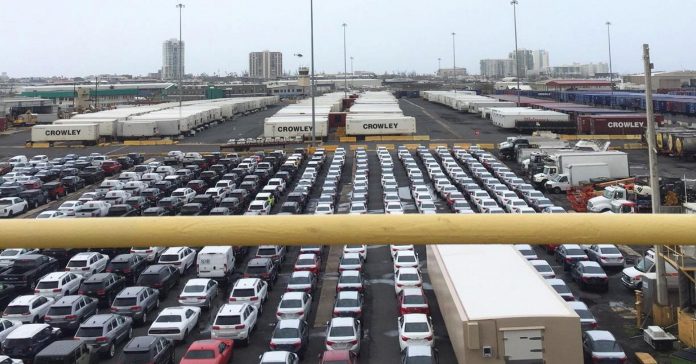 The Jones Act, officially known as the Merchant Marine Act of 1920, was signed by President Woodrow Wilson two years after World War I as a measure to protect U.S. jobs and keep foreign competition out. The act requires all goods shipped between American ports to be transported exclusively by U.S. owned and operated ships. Presidents Barack Obama and George W. Bush have been supporters of the act, saying the Jones Act was a crucial part of national security to protect the country from not being dependent upon foreign-owned vessels to transport goods for Americans.

In order to simply sustain the operations at Crowley’s port — to power the generators for the building, lighting, and the large amount of refrigerated containers, which contain perishable food and medicine — 2,500 gallons of diesel is needed per day. The No. 1 issue at the moment preventing these crucial supplies from being delivered to the 3.4 million Americans across the island is the lack of fuel for the trucks that transport the containers.

An issue that is weighing heavily on the management and employees of these shipping companies — many of whom have worked nearly nonstop since Saturday when the port reopened for services — is ensuring that the supplies the people of Puerto Rico need are physically on the island.

“It makes me sad and frustrated,” said Jose Pache Ayala, vice president of Crowley Puerto Rico Services. “Just to see that we have here all these goods, and that people out there are just begging, anxious, in the need of such important supplies and they are all sitting here in this yard.”

Supermercados Econo — one of the biggest supermarket chains on the U.S. territory — has 104 containers in the Crowley yard and is only slowly moving them out. V Suarez, a major food distributor, has 114 containers. Wal-Mart has 70 containers stuck at the terminal for lack of trucks, drivers and fuel to move them out.

Two hundred and twenty-six supermarkets across the island are ready to open, but they can’t open their doors until they have the diesel to power the buildings, according to the head of the food and beverage association.

The Federal Emergency Management Agency is trying to help alleviate this massive issue and stepped in to manage the fuel distribution disruption. On Wednesday afternoon, more than a dozen fuel trucks departed Crowley’s terminal in San Juan.

The Department of Defense has also stepped in to support FEMA’s efforts to stabilize the situation.

“Gasoline is beginning to flow to gas stations which, despite rationing, are unable to remain open for more than a few hours at a time,” according to the Pentagon’s latest situation update.

In the meantime, people across the island — many who have not had power or cellular service for over a week — are desperately trying to find ways to get the essential goods and supplies they need to survive.

Maria Correa, 62, a pastor at the church King of Kings in Brooklyn, New York, decided to take matters into her own hands. Correa is traveling with a group of four people in conjunction with the “World Cares Center” with a list of immediate needs that people on the island have requested.

“I have in my bag D batteries because a man reached out to our group saying his grandmother is on a ventilator that operates on batteries and they are about to run out,” Correa said on the plane ride to San Juan.

In addition to the batteries, the group has assembled care packages with nonperishable items, such as Spam, baby food, formula, diapers, water, first-aid kits, aspirin and other medicines.

The group arrived at JFK airport with 43 boxes, but due to restrictions on weight and total amount of carry-on bags being allowed per person, they were only allowed to bring 12 boxes and also a suitcase per person.

Gladys Garcia, 58, has family from Maunabo, a town just south of Yauco where the hurricane made landfall, and says she has yet to hear from any of her family members.

Satellite images from the National Oceanic and Atmospheric Administration show some houses with roofs torn off and debris scattered throughout the surrounding land.

To say the damage to the power, landline and cellular communications systems on the island is severe would be an extreme understatement.

Nearly 100 percent of the island, about 1.6 million Puerto Rico Electric Power Authority customers, remain without power and about 91 percent of cell sites are out of service, according to the most recent Department of Energy and FCC reports, respectively.

“People need help,” Correa said as she pointed at her handwritten list of addresses, phone numbers and items for the people who have reached out to her for help, “and we are going to try and help them.”