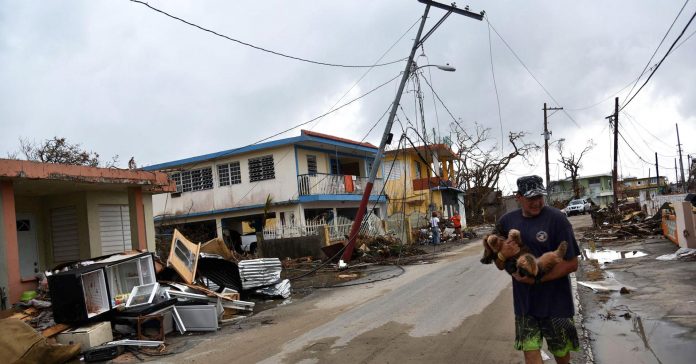 Puerto Rico‘s island-wide power outage will mean a surge in insurance claims for lost business income that will increase the already high cost of damage caused by Hurricane Maria, likely tipping some big reinsurers into the red this year, according to industry experts.

Claims from Maria, on top of two other major Caribbean hurricanes this season, could push total global catastrophe losses for the year as high as $190 billion, according to some estimates, which would make it the most costly year on record for the insurance and reinsurance industries.

That will cut deeply into some reinsurers’ capital reserves and could lead to ratings downgrades.

“It (Maria) is a major insured loss that is likely a pretty major negative surprise to the industry,” said Ed Hochberg,

North America head of reinsurance broker JLT Re Insurers pay reinsurance companies to take on a portion of their risks or to cover their losses once they reach a certain level, effectively shielding them from spikes in claims.

While that helps spread the cost of disasters, it means certain reinsurers are hit hard when big claims come in, depending on where they take on business.

Mapfre, which also acts as an insurer in Puerto Rico, expects “recent natural disasters” to cut its full-year profit by between 150 million and 200 million euros ($175 million and $235 million), the Spanish company said this week. Lloyd’s of London said on Thursday it expects net losses of
$4.5 billion from hurricanes Harvey and Irma. Inga Beale, the chief executive of Lloyd’s, said it was too early to assess losses from Maria. AIG and QBE declined to comment.

The U.S. territory of Puerto Rico remains almost completely without power more than a week after Maria destroyed its electrical grid. That means most companies and shops cannot
operate, and will likely file claims for business interruption, which is covered in most commercial policies.

“The longer the power stays out, the more you’re going to have business interruption claims,” said Keith Buckley, an analyst at Fitch Ratings. Estimates of when Puerto Rico will regain power range from three to six months.

Generally, business interruption clauses require actual physical damage to be sustained and coverage only lasts a set period of time, but the losses could mount up quickly.

For example, British packaging products company Essentra said this week that stalled operations at two of its plants in Puerto Rico would cost it 500,000 pounds to 750,000
pounds ($670,000 to $1 million) a week, with a “significant” part of that covered by insurance.

Puerto Rico is home to many manufacturing sites, including for large pharmaceutical companies such as Bristol-Myers Squibb, Eli Lilly and Co, Pfizer, Amgen and AstraZeneca.

Drug companies generally build hurricane-resistant facilities, said Duncan Ellis, U.S. property practice leader for insurance broker Marsh. But getting a factory running again after a disaster typically requires re-certification by the U.S. Food and Drug Administration, a process that can cost millions of dollars, depending on the facility’s size and the time for which it was closed, Ellis said.

“It can be a little more tricky than if you were making stainless steel nuts and bolts,” Ellis said.

Most pharmaceutical companies contacted by Reuters this week said their facilities had minimal damage and that they had stockpiled enough medicines to avoid supply disruptions. Amgen is using generators to power its Puerto Rico site, the company said.

Hurricane Maria alone could ultimately cause $15 billion to $30 billion in insured losses, including business interruption, according to risk modeling firm RMS. AIR Worldwide put the
number even higher, from $40 billion to $85 billion.

With another two months of the Atlantic hurricane season to go, 2017 could end up as the most expensive year ever for insurers and reinsurers, if the final tally exceeds the $143 billion in losses from 2011, the year a massive earthquake and tsunami hit Japan.

Those levels of losses could trigger a “capital event,” Fitch Ratings warned this week, meaning catastrophe losses might exceed earnings and produce a net loss for the year, forcing
reinsurers to dip into their capital reserves.

That could lead to rating downgrades, Fitch said, which would make it more costly for companies to raise debt. In extreme cases, reinsurers may choose not to pay dividends in
order to use those funds to replenish capital, said Buckley.

Profits, rather than capital, are most at risk, said A.M. Best reinsurance analyst Robert De Rose.

“The series of events does not represent a capital issue; however, earnings will be negatively impacted, and for some, the earnings impact could be material,” he said.

The upside for reinsurers is that big losses usually mean they have power to raise rates the following year.

“We could begin to see some firming of reinsurance pricing going forward,” said Hochberg.

Given the scale of the losses projected from Maria, on top of the other storms and two recent earthquakes in Mexico, reinsurance prices could rise “materially,” said Jefferies International analyst Philip Kett.