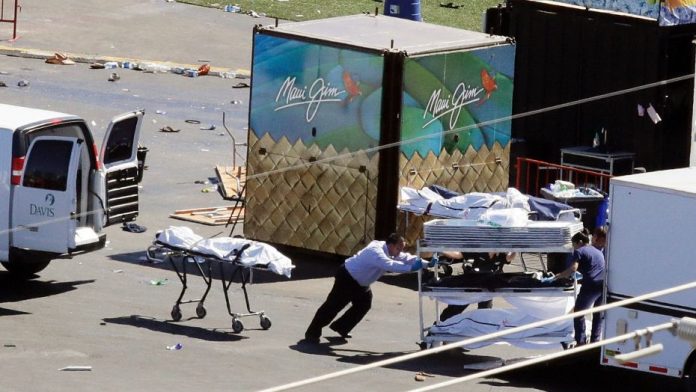 The name of one of those people is blacked out in the court records.

The other is Paddock’s girlfriend, Marilou Danley. She was in the Philippines at the time of the attack and is cooperating with investigators.

Authorities have said she’s not likely to face criminal charges.

Authorities also have said an unnamed person could face unspecified charges in the Oct. 1 shooting that killed 58 people and injured more than 800 others on the Las Vegas Strip.

The records were obtained after media organizations including The Associated Press sued to unseal court records and autopsy reports.

Judges in Las Vegas ordered the release of search warrant records and autopsy reports in a bid to answer ongoing questions about the investigation.

Separately, Judge Timothy Williams ruled that the Clark County coroner should release autopsy records of Paddock, and the people killed by gunfire, with victims’ names blacked out.

Coroner John Fudenberg maintains the records are private but county attorneys didn’t immediately respond to messages about whether he would appeal the ruling to the Nevada Supreme Court.

County lawyers maintain that autopsy information is confidential, with release restricted to families and to police investigating deaths.

“All records are public unless the law says otherwise,” said attorney Margaret McLetchie, who represents The Associated Press and the Review-Journal in the case.

She noted that Nevada state public records law does not directly address autopsies, and added that a deceased person has no legal right to privacy.

Clark County District Court officials also blacked out sentences that the judge agreed could affect an ongoing investigation focusing on the unnamed person and stemming from evidence found during the service of the warrants.

Sheriff Joe Lombardo on Jan. 19 released a preliminary report of the investigation and said police and the FBI believe Paddock acted alone before he killed himself as police closed in.

The police report characterized the 64-year-old Paddock — a retired accountant who amassed a millionaire’s fortune — as a high-stakes video poker player on a losing streak who was obsessed with cleanliness, may have been bipolar and was having difficulties with his live-in girlfriend.

It did not answer the key question: What made Paddock stockpile a cache of 23 assault-style weapons and fire for about 10 minutes out the windows of the high-rise hotel into a crowd of 22,000 people at an open-air concert on the Las Vegas Strip.

The sheriff has said he does not expect Paddock’s girlfriend, Marilou Danley, to face criminal charges.

She was in the Philippines during the massacre and was the only person named a person of interest in the case. Authorities questioned her when she returned to the U.S., and said she was cooperating with the investigation.