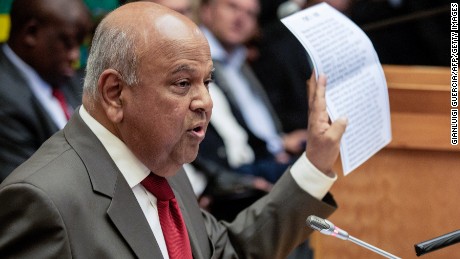 South African President Jacob Zuma had swung another scythe through his cabinet, repositioning or firing no less than ten ministers.

As the recently departed US Ambassador to South Africa put it on Twitter, “Holy wow. Midnight ministerial massacre in South Africa.”

Zuma has reshuffled his cabinet before, but this, say many, was a complete purge.

Zuma said the changes were made to “bring about radical socio-economic transformation and ensure the promise of a better life for the poor and the working class becomes a reality” in a video statement Friday.

Gordhan built a reputation as a steady hand who expertly guided South Africa’s economy and promoted its business interests. He first served as finance minister between 2009 and 2014, and returned to the job in December 2015, much to the relief of international investors.

Predictably, South Africa’s currency tanked on the news, and economists believe that ratings agencies are poised to downgrade the country to junk status.

But to focus on the economy is to miss the wider significance — many feel the very essence of South Africa is at stake.

It was a thinly veiled reference to Zuma. For years, the President has been dogged by allegations of corruption.

After decades of activism and government service, Gordhan says he found out through the media that he was being fired. The famously adept political organizer called on South Africans to mobilize.

“What should the public do? Organize. Organize,” he said.

Treasury staff clapped and sang revolutionary songs in an emotional sendoff for Gordon on Friday.

The developments capped off a remarkable week in South African politics.

Gordhan was in the midst of his yearly investor roadshow to the United Kingdom and the US, trying to convince ratings agencies that the country is politically stable, when he was summarily hauled back home by Zuma.

According to deputy president Cyril Ramaphosa and other political allies, Zuma fired the finance minister on the basis of an “intelligence report” claiming the finance team was looking to collaborate with investors to overthrow the government.

The leaked “report” was short and seemed amateurish. Gordhan called it nonsense, and it attracted little more than criticism from some government officials.

“I find it very difficult to believe that someone like Gordhan, who has served the country with everything he has and so much pride and total honor, planned to besmirch Zuma and his government overseas,” Ramaphosa told local media. “The actions Zuma has [taken] against Gordhan is based solely on assumptions.”

Ramaphosa’s public rebuke was a rarity amongst leaders in the ruling African National Congress, and proof of the deep divisions that Zuma’s presidency has sown. Zuma clearly went against the wishes of senior party members, allies, business leaders and opposition parties.

The opposition, meanwhile, has called for a vote of no-confidence in Parliament, a move they have attempted before. But they will need a significant portion of ANC politicians to turn their back on the President.

Message from the grave

Zuma even faced calls to resign from beyond the grave.

In an emotional funeral earlier in the week, with rumors already circulating of a cabinet purge, liberation hero Ahmed Kathrada, who spent more than two decades in jail with Nelson Mandela, was laid to rest.

To a standing ovation, an open letter that Kathrada wrote to Zuma last year was read out as a eulogy.

“Dear Comrade President, don’t you think your continued stay as President will only serve to deepen the crisis of confidence in the government of the country?” it said.

“And bluntly, if not arrogantly, in the face of such persistently widespread criticism, condemnation and demand, is it asking too much to express the hope that you will choose the correct way that is gaining momentum, to consider stepping down?”