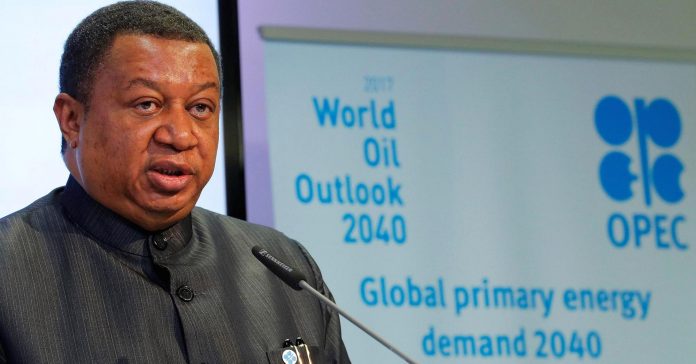 On Wednesday, OPEC raised its growth forecast for non-OPEC production in 2018 by 280,000 barrels a day from last month’s report. The group now sees oil supplies from outside the cartel growing by 1.66 million barrels a day this year.

Meanwhile, the world’s appetite for oil will increase by 1.6 million barrels a day, OPEC forecasts.

OPEC says economic growth in developing nations like China, India and Brazil remains robust. But it warns that rising U.S. interest rates could cause investors to pull capital from these countries, where foreign investment has boosted the economic activity and domestic oil demand.

“Nevertheless, the current healthy momentum in the global economy, together with the efforts undertaken by the OPEC and non-OPEC oil producing countries under the Declaration of Cooperation, is supporting the rebalancing of the oil market fundamentals,” it said.

Output from the 14 members fell by about 77,000 barrels a day in February, remaining relatively steady at 32.2 million barrels a day, according to independent figures cited by OPEC.

The group and other producers are keeping 1.8 million barrels per day off the market in order shrink global crude stockpiles to their five-year average. On Wednesday, OPEC said inventories were just 50 million barrels above that level.