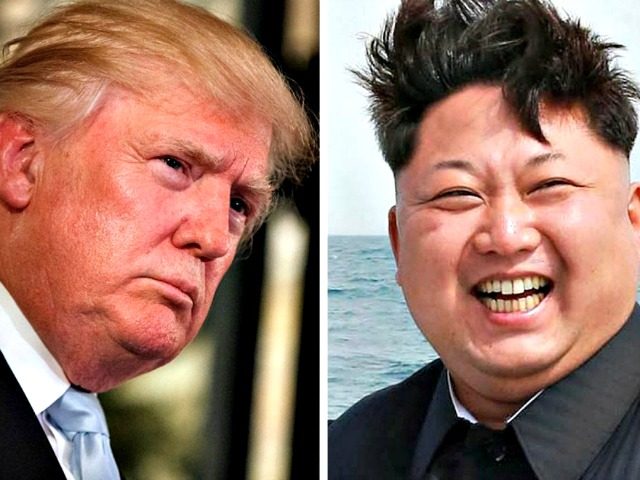 On the day President Donald Trump took office, he determined the need for a new approach to the denuclearization of North Korea that avoided mistakes of the past, a senior administration official told reporters on Thursday night.

“Kim pledged that North Korea will refrain from any further nuclear or missile tests. He understands that the routine joint military exercises between the Republic of Korea and the United States must continue,” said Chung.

The Trump administration plan included maximizing economic pressure, isolating North Korea diplomatically, and marshaling the resources of the U.S. and her allies and friends, according to the official. In a year of pursuing this strategy, Trump has remained open to the idea of dialogue with North Korea at the right time.

Chung and South Korean Intelligence Director Suh Hoon briefed Trump in the Oval Office on the meeting between Kim and South Korean officials. Also present at the briefing were Vice President Mike Pence, U.S. National Security Advisor H.R. McMaster, Defense Secretary Jim Mattis, Deputy Secretary of State John Sullivan, Chief of Staff John Kelly, Dir. of National Intelligence Dan Coates, and CIA Deputy Dir. Gina Haspel. According to the administration official, part of the message conveyed to Trump from Kim through the South Koreans was “a commitment to denuclearize,” a commitment to “refrain from testing nuclear weapons or missiles,” an understanding that South Korea and the U.S. would continue defensive exercises, and a desire to meet with Trump as soon as possible.

Trump accepted Kim’s invitation to meet with him after the day’s meetings between the South Korean and Trump officials.

Timing and location of a meeting between Trump and Kim had yet to be determined as of Thursday evening. President Trump expects to start seeing the North Koreans put the promises conveyed into action.

President Trump spoke with Japanese Prime Minister Shinzo Abe on Thursday night about the events discussed during the day. The senior administration official added that Trump has been communicating and coordinating with Abe regarding the situation his entire time in office.

A readout of the call between Trump and Abe detailed that “The leaders affirmed their strong intention to continue close trilateral coordination with South Korea to maintain pressure and enforce international sanctions until such point that North Korea takes tangible steps toward complete, verifiable, and irreversible denuclearization.”