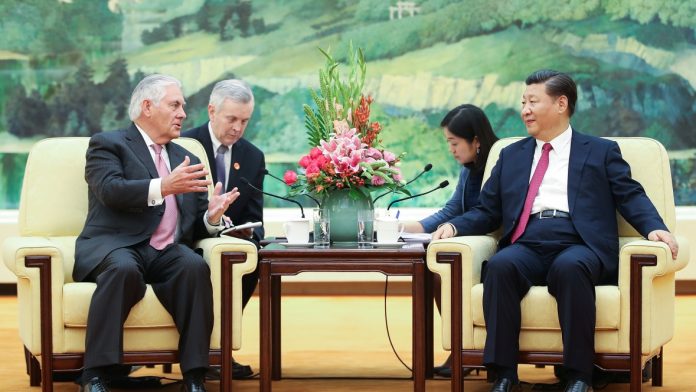 U.S. Secretary of State Rex Tillerson called Saturday for a calming of the situation on the Korean Peninsula, but said it was incumbent on North Korea to halt its missile launches.

Following meetings with Chinese President Xi Jinping and other officials in Beijing, Tillerson said he believes China has become deeply concerned about the North’s missile and nuclear programs, and is working hard to convince Pyongyang to re-enter talks, but did not say specifically what form those talks should take.

“I think the most immediate action that we need is to calm things down,” Tillerson told reporters. “They’re a little overheated right now. And I think we need to calm them down first.”

Asked whether that should apply to recent pointed remarks from U.S. President Donald Trump, Tillerson replied: “I think the whole situation is a bit overheated right now. I think everyone would like for it to calm down.

“Obviously it would help if North Korea would stop firing off missiles. That would calm things down a lot,” Tillerson said.

Ties between Beijing and Washington are considered more crucial than ever with the standoff over Pyongyang’s nuclear weapons and ballistic missiles entering a new, more dangerous phase as its leader, Kim Jong-un, and Trump exchange personal insults and threats of war with no sign of a diplomatic solution.

Trump has been pressing for tougher measures on Pyongyang from China, the North’s chief trading partner and source of aid and diplomatic support. Although adamantly opposed to steps that could bring down Kim’s regime, Beijing appears increasingly willing to tighten the screws on Pyongyang, and agreed to tough new United Nations sanctions that would substantially cut foreign revenue for the isolated North.

Tillerson reiterated Saturday that the U.S. would not recognize North Korea as a nuclear power, but said it also had no intention of overthrowing Kim’s regime.

In opening remarks at his meeting with Xi, Tillerson said relations between the sides continue to “grow and mature on the strength of the relationship between yourself and President Trump.”

“And we look forward to advancing that relationship at the upcoming summit,” Tillerson said, referring to Trump’s first state visit to Beijing expected in November.

Saying he had “a good working relationship and personal friendship” with Trump, Xi said the president’s upcoming visit offered “an important opportunity for the further development of China-U.S. relations.” The exchange, he said, would be a “special, wonderful and successful one.”

He said Trump’s visit also provided an opportunity to assess progress made between the sides since Xi and Trump met in April at the U.S. president’s estate in Florida.

There, they agreed to a 100-day plan for trade talks. After visiting China this week, U.S. Commerce Secretary Wilbur Ross said there’s been some progress, including a deal to let U.S. beef into China, but they need to tackle “bigger things and more difficult things.” The U.S. priorities are better market access, less protectionism and protecting intellectual property rights.

Tillerson is making his second visit as secretary of state to the world’s No. 2 economy and chief American rival for influence in Asia, and increasingly, the world.

Along with Xi and Yang, he met with Foreign Minister Wang Yi, who told Tillerson that China-U.S. relations “overall have a positive momentum and have arrived at an important opportunity to progress further.”