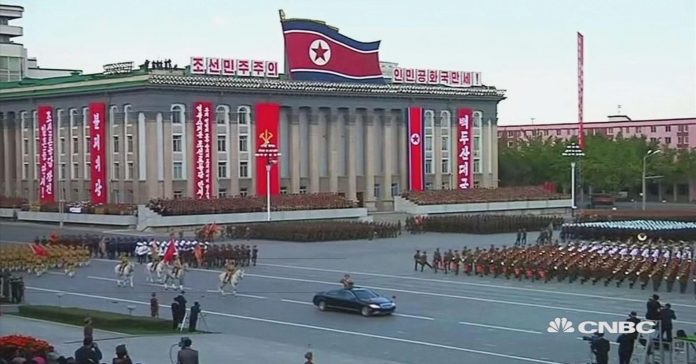 North Korea on Sunday accused the United States of trying to undermine an improvement in inter-Korean relations, while South Korean protesters tried to block senior North Korean officials on their way to the Pyeongchang Winter Games closing ceremony.

“The two Koreas have cooperated together and the Olympics was held successfully,” the North’s KCNA news agency said, citing North Korea’s foreign ministry.

“But the U.S. brought the threat of war to the Korean peninsula with large-scale new sanctions on the DPRK ahead of the Olympics closing ceremony,” the state news agency said, using the initials of the North’s official name, the Democratic People’s Republic of Korea.

Earlier, about 100 conservative South Korean lawmakers and activists staged a sit-in near the border with North Korea, facing off against about 2,500 South Korean police to protest against the arrival of a northern delegation led by an official accused of being behind a deadly 2010 attack on a South Korean warship.

The delegation took a different route, prompting the opposition Korea Liberty Party to accuse President Moon Jae-in’s administration of “abuse of power and an act of treason” by re-routing the motorcade to shield it from the protest.

The Winter Olympics in South Korea have given a boost to engagement between the two Koreas after more than a year of sharply rising tension over the North’s missile tests and its sixth and largest nuclear test in defiance of U.N. sanctions.

Kim Yo Jong, the younger sister of North Korean leader Kim Jong Un, led a delegation that made a three-day visit to the opening of the Olympics and the North Korean leader later said he wanted to boost a “warm climate of reconciliation and dialogue”.

Kim Yo Jong and the North’s nominal head of state were the most senior North Korean officials to visit the South in more than a decade.

But the North’s decision to send former military intelligence chief Kim Yong Chol as delegation leader to the closing ceremony has enraged families of 46 sailors killed in the torpedo attack on their ship and threatens the mood of rapprochement that Seoul wants to create at what it calls the “Peace Games”.

North Korea has denied its involvement in the sinking.