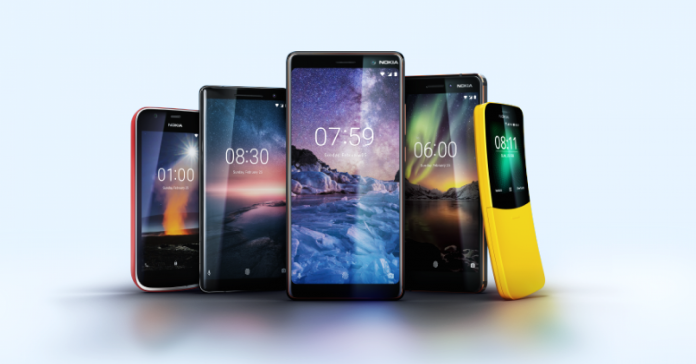 HMD Global, the company that now makes Nokia-branded phones, launched a slew of smartphones on Sunday, including a high-end offering to compete with giants Apple and Samsung.

The smartphones are the Nokia 1, a new version of the Nokia 6, the Nokia 7 Plus and the Nokia 8 Sirocco, HMD’s most premium offering.

At 749 euros ($921), the Nokia 8 Sirocco is nearing the $999 price of Apple’s iPhone X. The Nokia device runs on Android, has a 5.5-inch curved display, with a dual camera and wireless charging. It will be available in April, although the company did not reveal if it would be sold via a carrier in the U.S.

HMD also unveiled a new version of the Nokia 6 at 279 euros, and the Nokia 7 Plus at 399 euros. All of the devices run Google’s Android mobile operating system.

HMD is expanding its portfolio of smartphones to offer devices at different price points.

“It’s a critical year for HMD to again to make a deeper impact in the key geographies and our path is to become one of the key smartphone players,” Florian Seiche, CEO of HMD global, told CNBC ahead of the launch at Mobile World Congress in Barcelona, Spain.

HMD said it sold 70 million smartphones and feature phones in 2017, even though it was only selling devices for two quarters. The company would not break down what percentage of that was smartphones.

“Of course, still a very large number is on feature phones, but the momentum on smartphones is really great,” Seiche said.