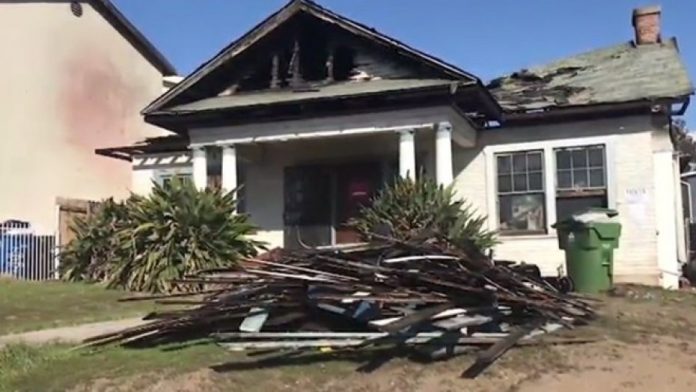 Neighbors living around a home that burned down in Los Angeles a week ago suspect squatters started the fire.

Neighbors living around an abandoned Los Angeles home engulfed by a fire last week suspect the blaze was started by a group of squatters who were using it as a meth lab. They now fear the unsightly property – which has debris piled up on the front lawn – will attract more trouble.

The situation brewing on a street in East Hollywood comes as the state is fighting a homelessness crisis, with encampments steadily expanding across the downtown areas of San Diego, Los Angeles and San Francisco.

“We have a good neighborhood. I’m not kidding. I raised all my three kids here,” a woman who lives across the street from the home told Fox 11. “We never had any problems in the past, and now this is the first time we have problems.”

Tucker Morrison, another neighbor, told the station that the house has become a magnet for transients in recent years and he has spotted men leaving the property with ingredients used for the production of methamphetamines.

“To the best of my knowledge it’s been squatters living there on and off for about a year and a half, but recently over the last month it’s been guys wheeling out a lot of kitty litter and a lot of weird smells coming from the house, we’re suspecting its meth,” he said.

The couple living across the street from the burned-out structure also told Fox 11 they fear it will attract more unwanted visitors and cause property values to plummet.

The station said the absentee owners of the home are apparently elderly or unwilling or able to secure the property for the time being.

“We are aware of the situation and we’re working with the LAPD, Neighborhood Prosecutor, and Building and Safety to address the issue,” said a spokesman for City Councilman Mitch O’Farrell.

Police have not yet taken into custody anyone involved in the blaze and the local fire department hasn’t announced a cause. The city’s building and safety department has posted a “Do Not Enter” sign on the property. It also said it’s notifying the owners that they are responsible for securing the property within 10 days or else Los Angeles will do it for them and send a bill.

The specter of homelessness expanding in California and the health problems associated with encampments has led one southern community to take tough action to dismantle a two-mile-long camp just a short drive from Disneyland, Fox News reported on Monday.

In a departure from the approach taken by other local governments in the state, officials in Orange County, Calif., have started to clear out the camp – by moving occupants and hauling away literally tons of trash and hazardous waste.

“It’s becoming part of the permanent landscape in those communities and there is no way we are going to allow Orange County land that is supposed to be used by residents to be occupied by the homeless,” said Todd Spitzer, who sits on the Orange County Board of Supervisors.

Los Angeles’ homeless problem has now spread past Skid Row to much of downtown. The amount of feces littering the streets in San Diego, Los Angeles and San Francisco has led to a hepatitis outbreak that spread throughout the state’s homeless communities, infecting 694 people. It skipped Orange County.

San Francisco’s feces problem is so bad that a website now exists to warn residents of which streets to avoid. Los Angeles raised taxes last year in order to build housing for the homeless and has started a roving toilet program.

“That isn’t going to happen in our county. It’s not going to be our Skid Row,” Spitzer vowed. “We need to be compassionate and empathetic. I’m writing checks all over the place. But I’m not going to intermingle this population with property owners, are you kidding?”

Approximately a half-million people in the United States are homeless, with California accounting for 25 percent — the largest number of any state, according to a survey by the U.S. Department of Housing and Urban Development. Orange County has 4,792 homeless.

A Los Angeles Times editorial over the weekend called the problem in the city a “national disgrace.”