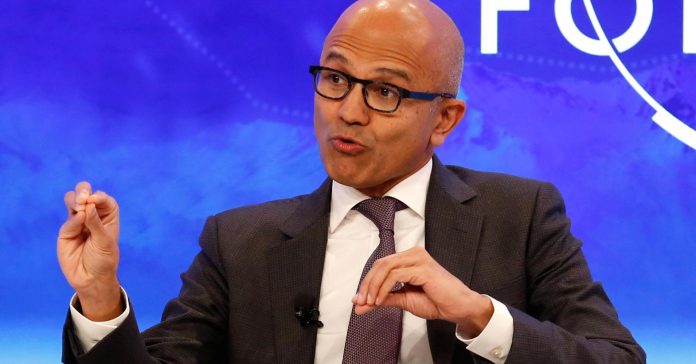 Microsoft CEO Satya Nadella on Monday suggested that Microsoft could grow more from its Office 365 line of cloud productivity apps than anything in the company’s 43-year history.

With business editions of Office 365, Microsoft faces competition from Google, as well as younger players like Box and Dropbox, in the race to get companies collaborating in apps running on remote cloud servers.

“The growth opportunity for what is Office 365 is a lot bigger than anything we’ve achieved, even with our high penetration in the client-server world,” Nadella said at the Morgan Stanley Technology Media and Telecom conference in San Francisco.

When companies transition from Microsoft’s traditional licensing business to cloud-based subscriptions, it’s “not a one-for-one move,” Nadella told Morgan Stanley analyst Keith Weiss at the event. Microsoft recently introduced the Microsoft 365 bundle, which includes Office as well as Windows, along with enterprise security and mobility services.

Nadella also talked up the company’s potential in the Azure public cloud infrastructure business, where it competes with Google as well as Amazon Web Services.

At the same time, Microsoft has also found rising revenue in the sale of cloud-based business intelligence software for charting and analyzing corporate data, with the Power BI product, which competes with Salesforce’s Analytics Cloud and Tableau.

“We went from nowhere to being the leader in BI in the cloud,” Nadella said. Power BI had a $500 million annualized revenue run rate, he said.

Plus, the Dynamics 365 offering, which includes a tool for managing relationships with customers, grew 70 percent in the most recent quarter, Nadella said.

Nadella took over from Steve Ballmer as the head of Microsoft four years ago.