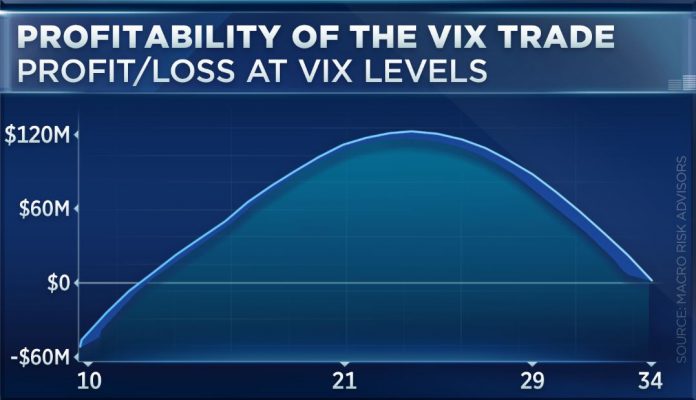 A multimillion dollar bet on a surge in market volatility is gaining notice in the options market and appears on track to become the largest trade this year in the CBOE volatility index.

That’s according to Pravit Chintawongvanich, head of derivatives strategy at Macro Risk Advisors.

In a note to clients Tuesday, Chintawongvanich pointed out that the trade initiated in July is betting that the CBOE’s VIX will rise meaningfully in the short term. The index has traded around historically low levels for much of this year.

Judging by the way the options trade was executed, the strategist pointed out, the trader is expecting the VIX (just below 10 in Thursday trading) to rise to the high teens or mid-20s, though the position would begin to lose money if VIX futures rise too far, too fast.

On CNBC’s “Trading Nation,” Chintawongvanich said the trade may very well be a hedge against a broader stock-heavy portfolio, rather than a pure bet that the VIX rockets higher.

“I think it’s a good hedge. I think the person who is doing this isn’t necessarily just betting outright that volatility is going to go up. I think they probably own a lot of stocks, a lot of things that would go down if North Korea risk escalates, or maybe something else, tech stocks pull back,” he said. “The point is, they probably need protection, and they think it’s a good place to get in there doing that, with the VIX being at extremely low levels.”

Since the VIX is a measure of anticipated 30-day volatility on the S&P 500, it tends to move inversely to the S&P 500. The “fear gauge” has been historically depressed this year because market moves have been relatively muted and stocks have generally risen.The index briefly fell to its lowest recorded level, below 9, in July.

The trader exchanged 2.1 million VIX contracts on Monday, bringing the total contracts traded to a whopping 3.15 million on the year, Chintawongvanich wrote in his note. This means the trader is on pace to dethrone another massive volatility bettor, who has been nicknamed “50 Cent” for the propensity to buy huge amount of VIX call options trading at about 50 cents each.

Chintawongvanich wrote that the trade will work best if the value of the underlying December VIX futures were to rise “moderately” over the next one to two months. However, if the trade were to rise too far, too quickly, the profitability of the trade would disintegrate. 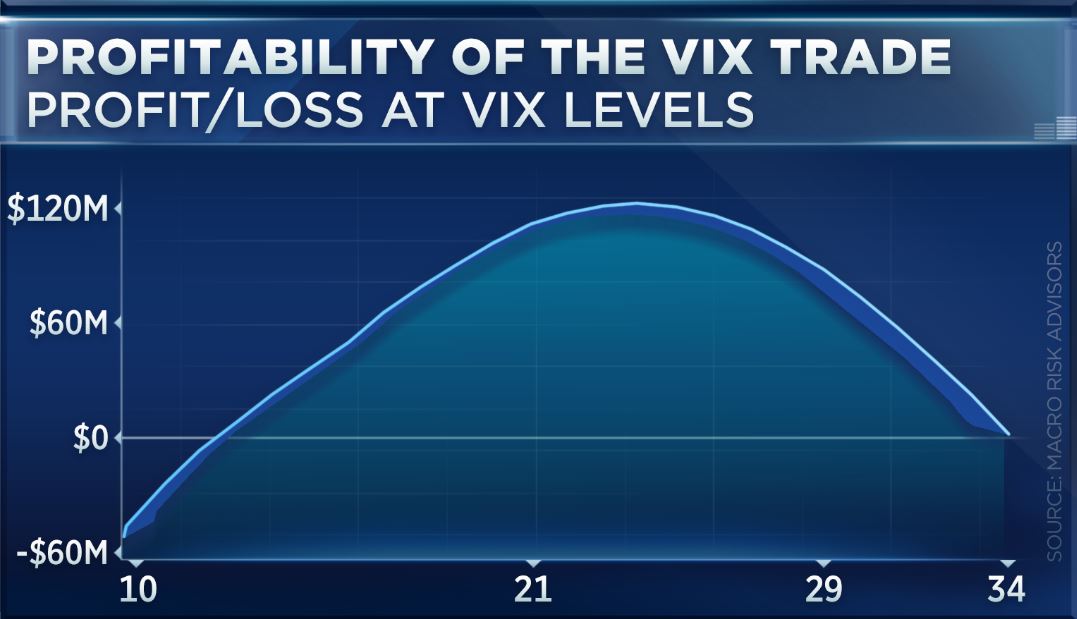 The trade entails buying an upside call option on the VIX, and then selling two calls with higher strike prices — a structure known as a “one-by-two call spread.” If the VIX is between the lower call (which in this case has a strike price of 15) and the higher calls (which have a strike price of 25) at expiration, the trade could return a serious profit. Once the VIX rises above those higher calls, however, the trade turns short the VIX; this is why a considerable VIX rise will begin to make it a loser.

The trade could be large enough to influence the VIX market more broadly.

Chintawongvanich wrote about the implications when a similar VIX trade was unwound in 2015: “The selling pressure of this giant unwind may have been a contributing factor for VIX futures only reaching their high later on September 1st, even though S&P futures hit their low on August 24th. It may also be one reason why VIX options did not seem to have quite as spectacular a return as S&P far out-of-the-money puts on that day.”

Dennis Davitt, portfolio manager at Harvest Volatility Management, said Tuesday on “Trading Nation” that “this trade could really run into a lot of complication with a lot of leverage, and could cause things to spiral significantly higher for the VIX.”