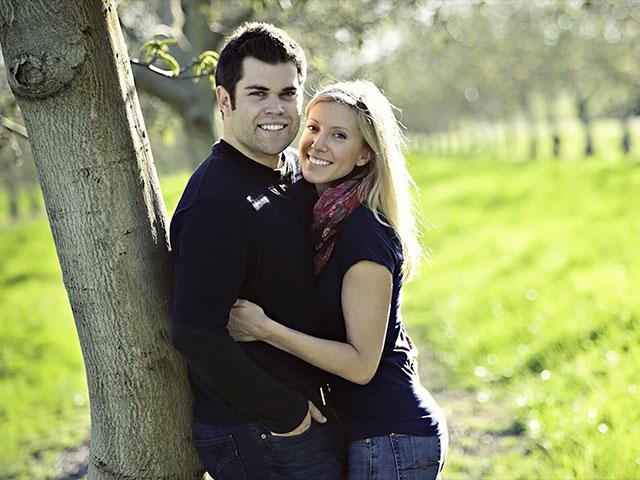 Phil and Alex Congilliere were young, happily married, and ready to start a family. But things didn’t go as planned. This is a story about love, redemption, and trusting God’s plan.

They met in college.

“He was the loud crazy type where you heard him from half a mile away and you knew he was coming,” Alex said. Phil joked, “For her you knew oh that’s totally never going to be a guy I’d ever date or marry so why would I spend a ton of time with him?”

But love took over. And eventually as a married couple, the pastor and nurse wanted more. Phil and Alex both remember wanting to be parents since they were just kids.

Wanting to Start a Family

“I remember being younger and playing catch with my dad and telling him that I can’t wait to do what you do. And he looks at me, what you want my job? No, I want to be a dad,” Phil remembers.

They went through years of infertility, sharing their pain with only each other. As friends and family members celebrated baby showers and positive pregnancy tests, Phil and Alex texted each other pictures of themselves – crying – aching to experience that joy.

“Honestly there were these moments where we were like, God, if you’re so good, why do you keep us from what is good?” Phil asked.

The dedication to their dream led the Congillieres to pursue adoption. Almost immediately, God gave them a sign. A pregnant woman in their church wanted to place her baby for adoption.

The first news of it came to Phil, who was a pastor at the time. He received a prayer request card. “It said we’re 37.5 weeks pregnant and looking for a family to adopt,” Phil remembers.

Just nine days later their daughter, Kinsley Grace, was born and they were finally a family of three after years of heartache.

Putting Themselves Out There

A few months later, Phil and Alex decided to add to their family again, but this time they knew they didn’t want to do it alone. Alex had an idea – what if they used YouTube to put themselves out there? Phil wasn’t so sure.

“I was like the farthest against it. I was like, listen I love being open and honest, I love sharing the journey but who would watch? Why would they watch? And what would be the point of them watching?” Phil asked.

Alex prevailed. Soon with full transparency, they were documenting their infertility treatments and journey of Kinsley’s open adoption.

The videos were raw with emotion but also filled with light and hope as their young family yearned to expand even more. They documented Phil’s male-factor infertility, Alex’s endometriosis surgery, and baby Kinsley reaching milestones.

Along the way, their YouTube audience began to grow. And then, something they didn’t see coming – just as they were starting in-vitro fertilization, a woman from across the country reached out to them on social media.

“We got contacted by a birth mom asking if we would consider adoption again. And our life went into another whirlwind,” Alex said.

The woman had been following them on social media. She connected with the way they parented their daughter and maintained a relationship with her birth mother, called “open adoption.” She asked Phil and Alex if they would be interested in adopting her baby girl, due in just a few weeks.

Phil and Alex prayed about it and then as Phil says, “We said yes God, do whatever you want with us and this stuff happens.”

So, they put treatments on hold and began documenting their second adoption and they brought the YouTube community along every step of the way – sharing highs and lows with raw emotion.

Phil and Alex filmed in the hospital as their second daughter, Callie Jo, was born. They were able to show the complex emotions of adoption – up close and personal. Videos showed the joy they were experiencing mixed with the grief for Callie’s birth mom, and her loving choice. Through tears, Phil and Alex talked about loving Callie’s birth mom “big,” when things didn’t go as planned at the hospital after her birth.

“We would do anything to be you know, bonding with our baby right now. It’s just different, it’s very different than before. We wanted to be honest with you guys on how emotional things are and tell you the truth and not just glamorize it,” Alex said in a video at the time.

As they edited and uploaded videos of Callie Jo’s adoption story, thousands subscribed to their channel for updates. The growth was exponential.

Phil says they saw two big and positive things that came during that time: “The overwhelming majority of people were coming to our channel and commenting saying the love that your birth mom is showing is more than I think I could ever show my own children and the second was I now want to go and love people in that same way so what we did by telling her story was actually pull out of the heart of what we want to do which is multiply the love that is in us.”)

As you watch Phil and Alex’s videos on YouTube, you’ll notice they often wear t-shirts that say “Love Multiplies.” What started as an adoption fundraiser evolved into a full-time calling.Phil and Alex wanted to become the resource they never had. So, they took a leap of faith. Phil left his job and they worked together to create a non-profit called “Love Multiplies.”

Phil gets emotional thinking about it. “The number one comment we hear back in this phase of life, in trying to build a family but it’s not happening is “I just don’t have anyone that I can turn to.””

“If something doesn’t exist, it’s our responsibility to make it happen. So we created Love Multiplies and it is a place for people to come and feel encouraged and supported and educated about infertility, about adoption and about growing healthy families,” Alex explains their new non-profit.

So, what’s next for the Congillieres? Still following their dream. They’re back to pursuing more infertility treatments to grow their family. But this time, they say it’s different.

“I had the pain of the empty arms and I don’t have that pain this time around. I would love for this to happen for us, I’d love for our IVF to work, but it’s going to be okay if it doesn’t. It’s absolutely going to be okay,” Alex said.

Since our interview, they’ve had a frozen embryo transfer that ended in a negative pregnancy test. And again, they documented every emotional, heartbreaking step.

They know God has a plan, and maybe more surprises for them in the future.

“I’m so blessed and thankful for my girls that that’s enough. God has blessed us so much and we don’t forget that and we’re thankful for that. We’re excited to see if He wants more for us, but we’re also very secure in what His plans are for us,” Alex said.

And we’re all invited along journey as Phil and Alex multiply their family and God’s love they want to show to the world.

Their YouTube channel currently has close to 50,000 followers and their videos have been viewed more than seven million times.