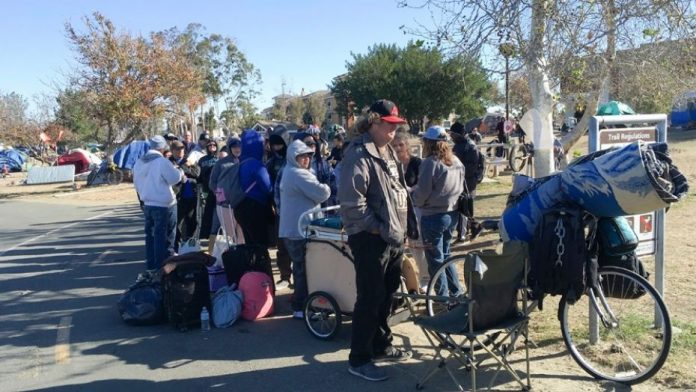 Homeless people prepare to move from their camp along a riverbed in Anaheim, Calif., on Feb. 20, 2018.

The specter of homeless encampments steadily expanding across the downtown streets of San Diego, Los Angeles and San Francisco – bringing with them a public health crisis – has one southern California community taking tough action to dismantle a two-mile-long camp just a short drive from Disneyland.

In a departure from the approach taken by other local governments in the state, officials in Orange County, Calif., have started to clear out the camp – by moving occupants and hauling away literally tons of trash and hazardous waste.

“It’s becoming part of the permanent landscape in those communities and there is no way we are going to allow Orange County land that is supposed to be used by residents to be to occupied by the homeless,” said Todd Spitzer, who sits on the Orange County Board of Supervisors.

Trash trucks and contractors in hazmat gear have descended on the camp and so far removed 250 tons of trash, 1,100 pounds of human waste and 5,000 hypodermic needles.

But the effort hasn’t been without controversy as homeless advocates, the American Civil Liberties Union and a federal judge have all weighed in on the fate of some-700 people evicted from their home along the Santa Ana River — next to Angel Stadium of Anaheim and a few miles from Disneyland, outside Los Angeles. 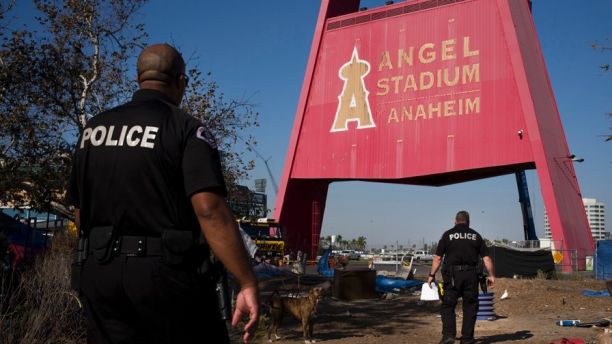 Officers are seen walking through the homeless camp outside Angel Stadium in late 2017, before the mass move-out.

Spitzer, whose district includes the encampment, has battled the advocates since last fall when the decision was first made to close the camp. The ACLU and others filed a federal civil rights lawsuit to stop this and several stays have ensued until last week, when the final go-ahead was granted.

For those being evicted, a mediation with U.S. District Court Judge David Carter offered the choice of a bed in a shelter or a month-long motel voucher; medical aid; drug treatment; job training; storage for their belongings and housing for pets at the county animal shelter.

So far, 544 people have been moved to shelters and motel rooms and approximately 100 remain at the riverbed. Crews counted 207 tents, but it is unclear if they are occupied.

‘That isn’t going to happen in our county. It’s not going to be our skid row.’

But one option is not negotiable – the homeless cannot move back to the Santa Ana River channel, which has paved shoulders where residents used to walk and bike. The river, which runs from the mountains to the sea, is home to much of Orange County’s groundwater and empties between pricey Newport and Huntington beaches. The beach has been closed often over the years due to high bacteria levels.

Officials in the county are mindful of how these camps have expanded in other major California cities.

Los Angeles’ homeless problem has now spread past Skid Row to much of downtown. The amount of feces littering the streets in San Diego, Los Angeles and San Francisco has led to a hepatitis outbreak that spread throughout the state’s homeless communities, infecting 694 people. It skipped Orange County.

Spitzer singled out for criticism Los Angeles and San Francisco. San Francisco’s feces problem is so bad that a website now exists to warn residents of which streets to avoid. Los Angeles raised taxes last year in order to build housing for the homeless and has started a roving toilet program. 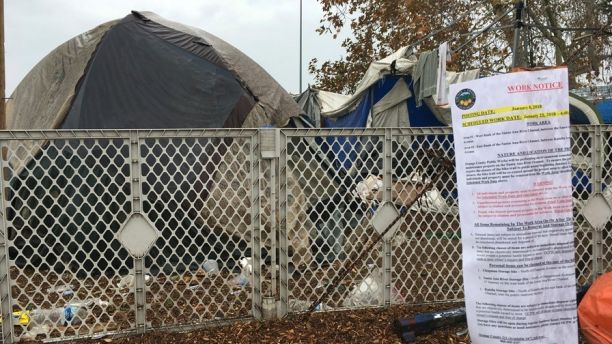 Signs were posted at the Orange County homeless camp before occupants were moved out.

“That isn’t going to happen in our county. It’s not going to be our skid row,” Spitzer vowed. “We need to be compassionate and empathetic. I’m writing checks all over the place. But I’m not going to intermingle this population with property owners, are you kidding?”

Reports from the scene in Orange County largely reflected an orderly move. Carter called it a “great credit to transparency, humanity,” according to The Los Angeles Times.

One advocate for the homeless told the same newspaper they heard reports of people who didn’t get food vouchers or couldn’t get to their destinations – but generally described the move as offering “better living conditions.”

Approximately a half-million people in the United States are homeless, with California accounting for 25 percent — the largest number of any state, according to a survey by the U.S. Department of Housing and Urban Development. Orange County has 4,792 homeless.

A Los Angeles Times editorial over the weekend called the problem in the city a “national disgrace.”

Spitzer blames the problem on two issues: legislation signed by Democratic Gov. Jerry Brown over the past several years that has eroded the penalties for drug use, possession and petty crimes to where police often don’t bother making arrests; and the change in a law so that treatment is no longer forced for drug abuse or mental health issues.

This week he wrote a letter to Brown, urging him to declare a state of emergency over the homeless issue and reverse previous forced-treatment laws.

“When I was a prosecutor, the law behind possession was a felony,” said Spitzer, a former deputy district attorney. “We would use the hammer under the law of a felony. We would force someone into treatment and upon successful treatment, the felony would be a dismissed. Now look what we have as a result of ridiculous short-sighted liberalization of drug use.”