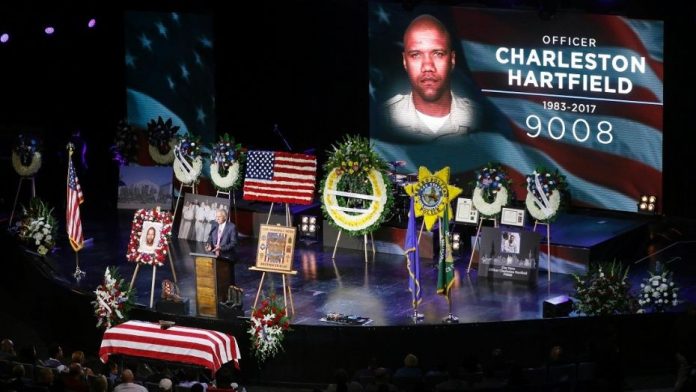 A Las Vegas police officer and U.S. Army veteran who was among the 58 people killed in the worst mass shooting in modern U.S. history provided instructions ahead of his death.

Charleston Hartfield, 34, was buried Friday following private graveside services. His burial came after a funeral that drew more than 2,000 family members, friends and police and military officers, with honors that included a motorcade down the Las Vegas Strip.

The married father of two was off-duty and attending the Oct. 1 concert where a gunman opened fire from a hotel room.

However, a year before his death, Hartfield began a computer file detailing the instructions for his funeral. 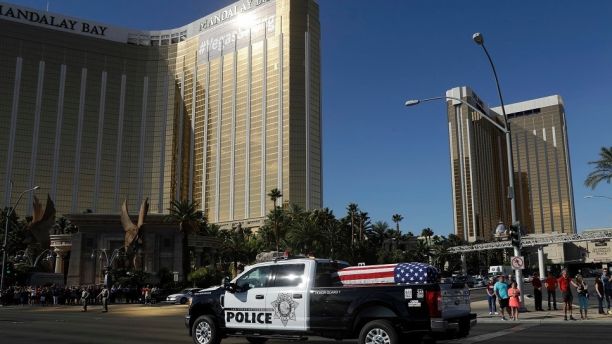 “If you’re reading this, then I’ve been called home,” Hartfield’s note read. The file was found by his wife, Veronica, following his death.

“Nothing I type will make this any easier, so I will get to the facts. My largest request: Please do not allow anyone to wear black. Black is totally depressing and I don’t want anyone expressing their sorrow over my passing,” Hartfield’s instructions read.

Hartfield asked that Nina Simone and Johnny Cash songs also be played during his funeral.

“I would like for everyone to enjoy themselves. And remember me for who I was. The truth only. None of that stuff about how great I was. Only real stories,” the officer wrote.

Everyone broke that rule over the next hour.

Friends, his cousin, brother and sister, and police and military officials including Brig. Gen. Zachary Doser, the head of the Nevada Army National Guard, characterized the man most called “Chucky” as an inspiration, a mentor and a quick wit.

Doser praised Hartfield, who at age 34 had accumulated 17 years of military service in Iraq and with a quartermaster unit in the Nevada Guard, as the epitome of “everything good about being an American.”

Investigators have not determined what motivated the shooter, Stephen Paddock, 64, a retired accountant, real estate investor and high-stakes gambler, to plan and execute his attack.

Lombardo said Hartfield ‘s death was considered on-duty because he tried to shield, protect and shepherd people in a concert crowd from danger. 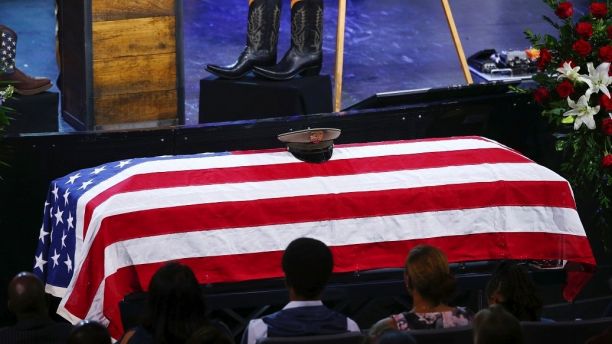 “That night, in a hail of gunfire, Charlie’s last actions spoke for him,” Lombardo said. “He took actions to save lives.”

Hartfield asked to be buried in a veteran’s area so he could continue to “protect” the U.S. with the other buried veterans.

“The only way I would like to be placed in the ground is if it’s in a veteran’s area. That way myself and the crusty old vets can hold formations and continue to protect and serve our great country once more,” Hartfield wrote.