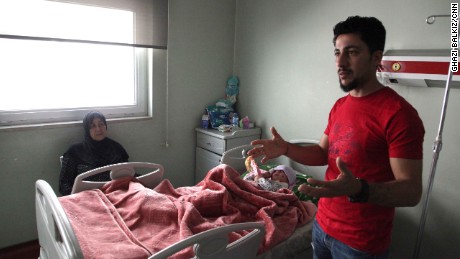 Her face is etched with small wounds, gauze wrapped around her throat and leg over burns that have yet to heal. She can’t open her eyes; there is shrapnel in one of them, the other painfully closed. Doctors don’t know if she will be able to see properly again.

Her grandmother is lost for words. Tears start to fall.

“I am thinking it’s better to be dead. I am thinking to die, rather than a life like this. (Hawra’) was like a little flower. She would play and run. Now, she how has no mother, no eyes,” Aliya says.

Hawra’s mother was killed, we are told, in an airstrike on March 17. There were multiple US coalition-led strikes that day in their west Mosul neighborhood, where allegations of civilian casualties have since emerged.
The series of airstrikes are now under investigation by both the US and Iraqi governments. But a US defense official has said that, so far, there has been no indication of a breakdown in US military procedures governing airstrikes.

So far, 141 bodies have been recovered at the site of the airstrike on March 17, Col. Mohammad Shumari, head of Iraqi civil forces, told CNN on Thursday. He added: “There are still bodies under the rubble.”

In reality, the number is probably much higher.

“It was a mass killing,” Aliya says through her tears.

Ala’a Al-Tai, Hawra’s father, describes that day and the street their home was on. He says there was a row of houses that led to an intersection where ISIS fighters had gathered. The houses are interconnected by rat lines — holes carved out of the walls that are 40 centimeters wide and 100 centimeters high (about 15 inches wide by 39 inches high) — and allow ISIS fighters to move undetected.

The tunnels offered the families a shelter. Around 30 people, including women and children, sought refuge in a single home at one end of the street.

Before the fighting broke out, little Hawra’ along with her mother and two relatives used the rat lines to move through three buildings and return to their house to bake bread, wash and grab more clothes.

About a dozen ISIS fighters were at the intersection that day, Ala’a believes. Soon the shooting intensified and then the strikes started.

“There was dust everywhere,” Ala’a tells us.  “My mother started to scream … Rocks and debris were falling down on the house we were in. She said go see what happened.”

Three homes on the block were leveled including the one with his family still inside.

Related: Finding the family who sheltered us in Mosul

All he could hear was his daughter’s feeble cry.

“I could just hear her voice,” he recalls. “There was a block that had fallen on her. There was also a metal frame — that’s what lodged the shrapnel in her face and her eyes. I screamed for her mother, my aunt and uncle but no response.”

Pulling her from the rubble, she was barely recognizable; she was black and looked charred.

They begged the ISIS fighters to allow them to leave. Instead, an Iraqi ISIS member offered to kill his little girl, Hawra’.

“He (an Iraqi ISIS member) said ‘I could just shoot her,'” Ala’a remembers. “He said ‘why do you want to save her, she’s going to die anyways.'”

They even pleaded to go further into ISIS territory in pursuit of medical assistance, but Ala’a says an Egyptian ISIS member, who he thinks was the head of that unit, told them they couldn’t leave because ISIS were using the remaining civilians as human shields.

Ala’a tried to clean Hawra’ up; she was moaning as he tried to give her some water.

He adds: “I saw my wife the next day, I saw her leg and her intestines so I covered her in a blanket and left.”

It took three days for the Iraqi security forces to liberate the neighborhood. Three days to get his little girl medical help.

Others helped by burying the bodies of his wife, aunt and uncle.

That was not the deadliest of the strikes that day. Around the corner, a multi-story building was also brought down, where more than 100 people are believed to have sheltered.

And these are hardly the only allegations of civilian casualties.

Every day in Mosul, a civilian population held hostage by ISIS is caught between their captors and their liberators. Airstrikes, bombs, bullets and explosions leading to deaths don’t make headlines.

Ala’a whispers when he mentions his wife’s death in the presence of Hawra’ but she hears us talking about her eyes.

“Look, I can open them,” she murmurs, using her tiny fingers to lift her eyelids ever so slightly.

Then she asks for her mother again.