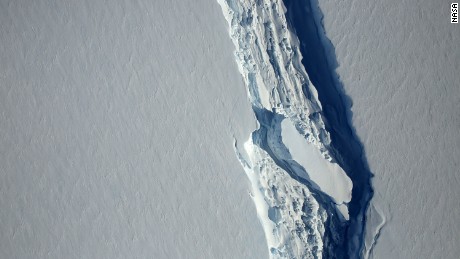 Larsen C — a sprawling sheet of ice in western Antarctica — is currently attached to its parent shelf by 20 kilometers (12.4 miles) of ice, according to UK-based research team Project MIDAS.

Once it splits, the crack will produce an iceberg around 5,000 square kilometers (1,930 square miles) — approximately the size of the state of Delaware.

In August, researchers at MIDAS reported that a crack in Larsen C grew 22 kilometers (13.7 miles) in six months’ time. In December the rift accelerated — clocking an additional 18 kilometers (11 miles) of further movement through colder glacial ice within a month.

Although this isn’t the first time the Antarctic has seen icebergs produced in this way, Larsen C’s split will significantly change the landscape of the continent.

“When it calves, the Larsen C Ice Shelf will lose more than 10% of its area to leave the ice front at its most retreated position ever recorded; this event will fundamentally change the landscape of the Antarctic Peninsula,” lead researcher Professor Adrian Luckman said in a statement posted to the MIDAS website.
Read: Amid higher global temperatures, sea ice at record lows at poles

Martin O’Leary, a researcher at MIDAS, told CNN the huge iceberg could render the remaining sheet of ice unstable — causing sea levels to rise and to overall changes to the Antarctic’s landscape.

“I think in terms of the impact that the iceberg has on the ocean, it’s a very spectacular event but its not going to be a huge thing in itself — the iceberg is big but the oceans are a lot bigger,” O’Leary added.

In 2002, Larsen C’s neighboring ice shelf, Larsen B, violently broke off from its parent, shattering into millions of pieces — accelerating a mass of broken ice into the Antarctic current.

Before Larsen B collapsed, it demonstrated a pattern similar to Larsen C. In 1995, another ice shelf, Larsen A, also broke off from the same ice mass.

Since then, researchers at MIDAS have been tracking Larsen C with a close eye.

The team says the break in Larsen C has likely been caused by natural geographic patterns marked in their research for decades.

“We don’t think there is a strong link to change climate change in terms of the provocation of the crack in question … but we couldn’t work that out,” O’Leary said.