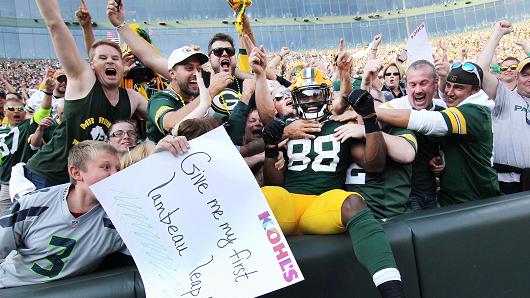 Ty Montgomery of the Green Bay Packers celebrates with fans after scoring a touchdown during the third quarter against the Seattle Seahawks at Lambeau Field on September 10, 2017 in Green Bay, Wisconsin.

The game is the first of the 10 NFL matches Amazon will be streaming this year as part of a $50 million deal.

But Amazon’s NFL stream isn’t available to everyone — you must be an Amazon Prime member to watch it.

Amazon Prime is a paid membership program that gives access to free two-day shipping, a bunch of online video and songs, as well as online storage space. It costs $99 a year or $10.99 a month. If you just want access to Amazon’s video streaming service, it would cost $8.99 a month.

You can use this link to sign up for a free trial.

Once you’re a Prime member, you’ll be able to watch the game on any kind of device, including your own laptop, smartphone, or tablet. It’s available on Amazon.com or through Amazon’s Prime Video app.

Amazon is expected to invest $4.5 billion in its video streaming business this year, which is slightly below Netflix’s $6 billion content budget, according to JP Morgan. Amazon CFO Brian Olsavsky said last year that the company would “nearly double” its investment in video, too.

And if the NFL stream turns out to be a success, expect Amazon to move into other sports categories as well. According to Manchester United’s vice chairman Ed Woodward, Amazon is likely to make a strong push for a bid to win streaming rights for the English Premier League.

“Absolutely, I think they’ll enter the mix. I think, anecdotally, there were strong interests in the last cycle,” Woodward said during Manchester United’s most recent earnings call, when asked about Amazon and Facebook potentially making a bid. “We’re going to see an increasing engagement from these — and we would welcome the interest.”

Amazon also released a funny ad that should get you geared up for tonight’s game: