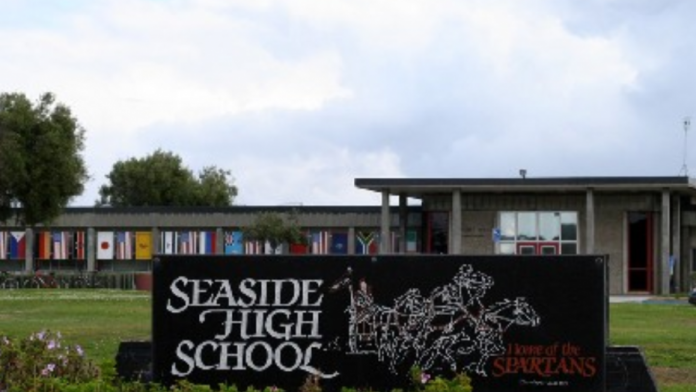 A high school teacher in Seaside, Calif., accidentally fired a gun Tuesday afternoon while giving a demonstration about gun safety.

A high school teacher in Northern California accidentally fired a gun inside a classroom Tuesday afternoon and injured at least one student.

The Mercury News reported that Dennis Alexander, a reserve police officer for Sand City, had been providing safety instructions at Seaside High School when he accidentally fired a single shot from a semi-automatic handgun into the ceiling, police said.

A student was hit in the neck by debris after the bullet ricocheted off the ceiling, but was not seriously injured, police said.

The incident was brought under control and classes resumed, but an investigation is ongoing, the Monterey County Herald reported.

“We’re looking into any violation of city ordinance or the penal code and we’ll determine whether or not there are any applicable charges,” Seaside police Chief Abdul D. Pridgen said.

Seaside is about 116 miles south of San Francisco.

In Alexandria, Va., a school resource officer accidentally fired off a gun inside a middle school while students were attending classes. No injuries were reported and the officer was placed on administrative leave for the duration of an investigation.

Administrative gun use in classrooms has been a contentious subject following the mass shooting at a high school in Florida on Feb. 14. Thousands of students across the U.S. are planning to stage walkouts Wednesday to raise awareness about gun violence in schools.