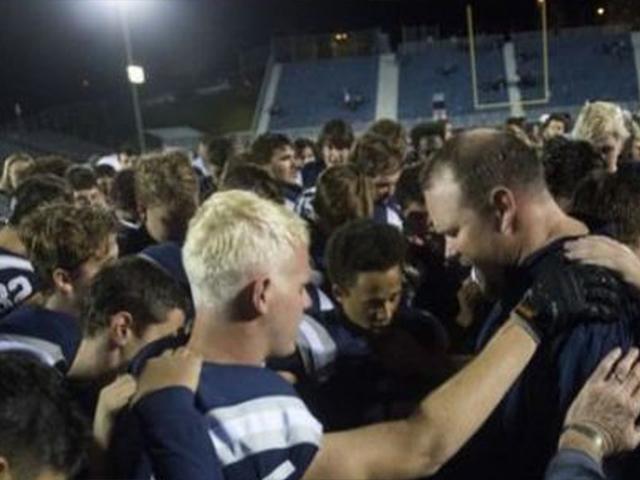 Indiana’s Reitz High School football coach Andy Hape is under fire for praying with his players on the field.

The Freedom From Religion Foundation (FFRF) called the prayer a “serious and flagrant violation of the First Amendment” and is urging the Evansville Vanderburgh School Corp. (EVSC) to investigate the coach.

It all began when a photo of Hape bowing his head in prayer with his team after a game was published in the Courier & Press Westside newspaper. An unidentified local resident was offended by the picture and anonymously reported Hape’s actions to FFRF.

Now, the group’s attorneys are demanding that Hape stop praying with his students.

“It is illegal for public school athletic coaches to lead their teams in prayer, participate in student prayers, or to otherwise promote religion to students,” the group’s attorney, Ryan Jayne wrote in a letter sent to the EVSC last week.

“When public school employees acting in their official capacities organize and advocate for a team prayer, they effectively endorse religion on the district’s behalf,” he added.

However, EVSC spokesman Jason Woebkenberg, isn’t so sure.

Despite this, EVSC faculty do have to abide by a few rules when it comes to religious expression.

“Corporation staff shall not use prayer, religious readings, or religious symbols as a devotional exercise or in an act of worship or celebration,” the EVSC policy states.

Metropolitan School District of Mount Vernon Superintendent Tom Kopatich knows what it’s like to get push-back for praying with students.

Kopatich, who served as the Mount Vernon High School’s basketball coach in the 90’s, used to pray the Lord’s Prayer with his team. He too was warned about his actions.

“The only thing I had was my athletic director came to me and said, ‘You need to be careful if you’re leading prayer. Just be very careful with that.’ … That was my very first year, and I coached several years, and we did it all the way through,” he said. “I didn’t hear anything else.”

Twenty-three years later, he is disappointed Hape and other school faculty across the country are getting in trouble for expressing their religious beliefs.

“It’s sad that it’s coming to that place that we’re trying to eliminate that,” he said. “People have to realize, if you don’t want to be there or you don’t want to participate in something of that nature, you don’t have to. It’s a choice.”