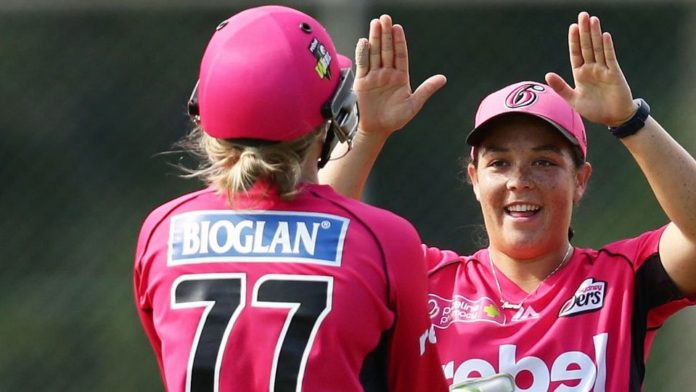 
‘Lauren Smith was my Player of the Match’ – Healy

Last season’s finalists Sydney Sixers secured their sixth win on the trot – second in two days – to extend their lead at the top of the Women’s Big Bash League table to four points. This after they lost three of their first four games.

Perth Scorchers, their closest challengers, were the losers this time, although they had dominated the first three-quarters of the match, with Lauren Smith taking 4 for 23 with her offspin, and Alyssa Healy and Ellyse Perry sharing 67 for the first wicket. A Sixers’ stumble took the match to a tense final over when Sarah Aley cracked back-to-back boundaries to seal a four-wicket win.

Sixers allowed only 19 runs in the first six overs of the match. Ellyse Perry began with a maiden, then Aley’s first ball had Suzie Bates caught at mid-off. Marizanne Kapp came on for a third over, and bowled Elyse Villani. Just like that the Scorchers’ two best batsmen were dismissed and they finished the Powerplay at 19 for 2.

That Scorchers were able to set 130 after such a poor start – and the failure of their fancied top three – was down to superb innings of 37 from both Heather Graham, their 20-year old star, and Lauren Ebsary, their 33-year old veteran.

Graham was brave and intelligent, using the V both in front and behind her for runs. She was confident with the sweep – conventional and reverse – and her straight drives were equally clean.

At the halfway stage of the innings, as Nicole Bolton became the first of Lauren Smith’s four wickets, Graham was joined by Ebsary, who batted through to the final over, when she was bowled by Smith.

When Graham fell to Perry, caught well in the deep by Ashleigh Gardner, Ebsary sent the next two balls for four, through point and cow corner, and kicked on even as wickets fell around her.

Defending 129, Bates opted to start with her two English quicks Anya Shrubsole and Katherine Brunt and it initially worked a treat. With both bowlers cannily varying their pace and finding movement through the air, Perry and Alyssa Healy, the Sixers openers, could barely lay bat on ball, managing just 10 runs in the first four overs.

Sensing the struggle, Bates gave both bowlers a third over, and it backfired. Shrubsole was unlucky in the fifth, with two slogs falling just short of fielders, and Healy inside-edging past the stumps for four. But with 10 taken from the over, the shackles had been broken.

Healy struck Brunt for consecutive fours in her third over before laying into Emma King’s offspin, with 16 coming from the ninth over, including a stunning six down the ground and a reverse-swept four and Sixers were halfway to their target with 11 overs left.

Always time for a wobble

Somehow, though, Sixers could not run away with the game. Bates had Healy caught in the deep in the 10th over, then a brilliant direct hit from cover by Ebsary accounted for Gardner. Perry had steadily accumulated but just as she began to accelerate, with a beautiful six over midwicket, Sara McGlashan was stumped skipping down to left-arm seamer Katie-Jane Hartshorn.

Brunt, returning to complete her allocation in the 19th over, struck twice in two balls as Kapp and Angela Reakes inside-edged onto their stumps to leave Sixers at 124 for 6 and needing six off the last six balls. Was it time to Panic? Not Aley. She flicked two from each of her first two balls, from Brunt. Then, after Dane van Niekerk had handed her the strike in the final over, she swept Bates for a pair of fours to seal the win.

Will Macpherson writes on cricket for the Guardian, ESPNcricinfo and All Out Cricket. @willis_macp