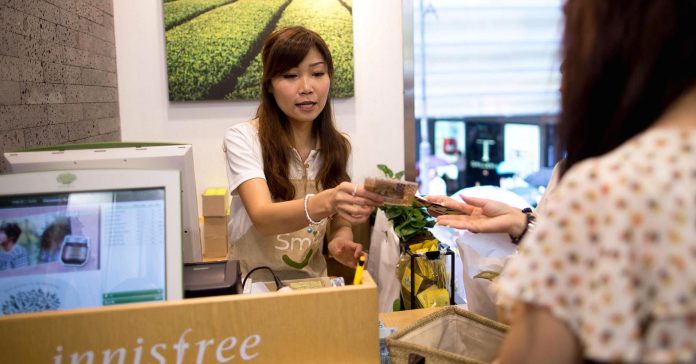 Beijing is angry at Seoul for embracing an American missile defense system intended to stop potential launches by North Korea. The South Korean conglomerate that donated a golf course to house the system has been forced to sell its Chinese stores. Chinese drivers have stopped buying Hyundais and Kias. And fewer Chinese tourists are visiting South Korea. On Thursday, South Korea unveiled tax benefits for retailers hit by the tourism drop-off and cheap loans for its automakers.

But Mr. Li’s enthusiasm for South Korean snail products helps explain a development that might surprise some people watching the relationship between China and South Korea deteriorate: Trade between the two countries is steadily rising.

Many colleges have agreements with banks to offer accounts to students. Experts urge students to check the fees and compare their banking options.

“I support my country and love my country, but I don’t think this should affect my consumption decisions,” Mr. Li, who once studied in South Korea, said by phone from the southern city of Guiyang.

That is good news for South Korea, though perhaps not for its snails. Snail slime products are widely believed in Asia to be good for rejuvenating skin, and Mr. Li uses it on his face to prevent wrinkles and remove acne blemishes.

“I should be able to maintain my own ideas of consumption and my personal rights,” he said.

Even as tensions flare between Beijing and Seoul over how to deal with the heated rhetoric between the United States and North Korea, the growing trade relationship shows that South Korea still makes what China needs. It supplies semiconductors for Chinese tech companies such as Foxconn, which makes phones for Apple. Young, affluent Chinese are still buying cosmetics and eagerly taking in Korean movies and music.

That trade could ease in coming years as China upgrades its technological capabilities. But for now, politics cannot overcome China’s appetites.

“It surprised me that it rebounded so quickly,” said Yanmei Xie, a China policy analyst for the Beijing-based consulting firm Gavekal Dragonomics a co-author of a paper on China’s boycott of several South Korean goods in March, when the United States began to deploy the missile defense system. China worries that the system — known as Terminal High Altitude Area Defense, or Thaad — could give the United States a military advantage over its own missiles.

South Korea’s exports to China rose 12 percent to $88.1 billion in the January-August period from a year ago, according to the Korea International Trade Association. But tensions did take a toll on some South Korean businesses.

China forced the shutdown of 87 out of 112 stores owned by the South Korean supermarket chain Lotte, which provided land for the system, saying the company violated fire-safety regulations. Banner-waving protesters besieged Lotte stores and heckled customers who entered them. The company said earlier this month it had hired Goldman Sachs to sell its Chinese stores.

Chinese authorities also stopped construction of a Lotte indoor theme park in the city of Chengdu and halted production at Lotte’s joint factory with Hershey.

For the first seven months of this year, Chinese sales of Hyundai cars fell 41 percent from a year ago, even as the broader market grew, according to LMC Automotive, a global consulting company.

The number of Chinese tourists visiting South Korea fell by nearly half to 2.5 million over the same period, according to the Korea Tourism Organization.

Ms. Xie, of Gavekal Dragonomics, said she had expected the impact to last for about a year. That was the case in 2012, when tensions flared between Japan and China over a territorial dispute. Japan’s exports to China fell by about a tenth, according to the Japan External Trade Organization, but returned to normal the next year.

“Chinese consumers could ultimately forgive Japan,” she said, “so it shouldn’t be surprising that they can forget about their hatred of South Korea as well.”

China’s smartphone makers rely heavily on South Korean chip producers such as Samsung Electronics and SK Hynix for chips to expand memory capacity in phones. In the first eight months of this year, China imported $23 billion worth of semiconductors from South Korea, half again as much as a year ago, according to the Korea International Trade Association.

Chinese consumers, for their part, love South Korea’s tear-jerker soap operas and catchy pop music. Many want to imitate their favorite Korean celebrities’ obsessions, be it fried chicken, a 10-step skin care regimen or a “V-shaped face”, a common cosmetic-surgery demand in which the jaw is broken down and shaved into a pointed V.

Song Yang, who works in a duty-free store in Seoul, hauls two suitcases filled with about $6,000 worth of skin care products and cosmetics back to China every two months. Ms. Song — a “daigou,” or a buyer and transporter of foreign consumer goods — takes orders on WeChat, a popular social media tool, from Chinese people who want to save on the latest masks and cosmetics, and makes about $1,800 per trip.

She said she stopped taking orders for about two months after demand plummeted in March. But interest has rebounded, she said, adding that orders for August and September “are hotter than ever before.”

“People are queuing for at least two hours, especially for skin care,” Ms. Song said by phone. “I think the impact of Thaad on duty-free stores in South Korea or on Korean goods is gone.”

Korean officials say blips in demand related to the missile system worry them less than China’s brutally competitive and fast-changing market. While South Korea’s chip makers are still more sophisticated than their Chinese counterparts, China has caught up when it comes to steel and petrochemicals.

“We are more concerned about the competition in China than the short-term effects of the Thaad backlash,” said Park Jin Woo, senior researcher at the Korea International Trade Association.

Felicia Jia, a Beijing-based advertising executive who uses South Korean horse oil — derived from horse fat — said she took heart from the ousting in March of Park Geun-hye, South Korea’s former president, who was a proponent of Thaad. She resumed buying South Korean skin care and cosmetics products because she assumed that the new president, Moon Jae-in, would halt the missile defense system.

When told that Thaad was probably here to stay, Ms. Jia said: “Really? That is annoying. In future, I will stop using South Korean goods.”

“I really don’t understand politics, “she added. “But I still have to have a patriotic heart.”