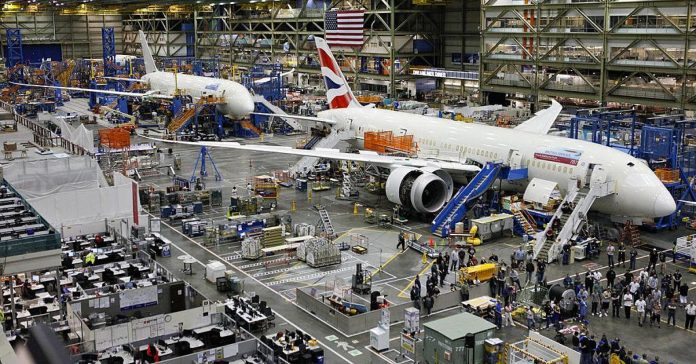 Boeing shares surged before the market’s open Wednesday after the aerospace and defense contractor posted fourth-quarter results that solidly outpaced analyst expectations, boosted by strong demand across its business units.

The company provided an upbeat forecast for 2018, saying it expects to deliver between 810 and 815 commercial aircraft this year. That’s an increase of at least 47 from last year, when it set a new company record by dispatching 763 jets — beating its previous high by one.

“Our team remains focused on winning through innovation, driving growth and productivity and extending our position as the world’s leading aerospace company,” Boeing CEO Dennis Muilenburg said in a statement.

In the quarter ended Dec. 31, Boeing’s net income nearly doubled to $3.13 billion, or $5.18 per share, from $1.63 billion, or $2.59 per share, a year ago. Excluding non-recurring items, and a gain from tax law changes, Boeing earned $3.06 per share. Analysts were forecasting earnings of $2.89 per share, according to Thomson Reuters.

Boeing expects to bring in $96 billion to $98 billion in revenue next year.

Shares of Boeing were up more than 5 percent in premarket trading.